We've already established that the Lightning's defense has been disappointing this season, but there's one area where it's a major problem: special teams.

By now, we all know that defense has been the Tampa Bay Lightning's Achilles Heel so far this season. Their offense has been slightly down from last season -- 2.89 goals per game, compared with 3.20 per game at this point in 2010-2011 -- but their real struggles this season have come in the defensive zone. Their 122 goals allowed ranks them fourth worst in the Eastern Conference, and it's been a major reason why they are still stuck in fourth place in the Southeast Division.

But to say the Lightning have struggled on defense is too vague. Where exactly have they struggled? Are they performing poorly at even strength, or is their defense on penalty kills to blame? Let's take a look. 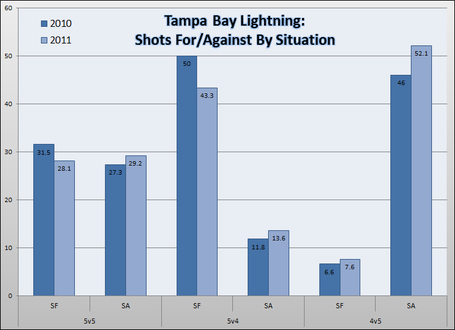 With a quick glance at these numbers, it becomes obvious that the Bolts have performed worse overall this season. They have averaged fewer shots in every situation except when shorthanded, and they are allowing more shots in every situation. The shots against difference is most pronounced when on the penalty kill, as they are allowing around six more shots per 60 minutes than last year.

Without context, though, it's difficult to get a handle on the impact of these changes. When compared with the rest of the NHL, exactly how good (or bad) have the Bolts been in these situations? 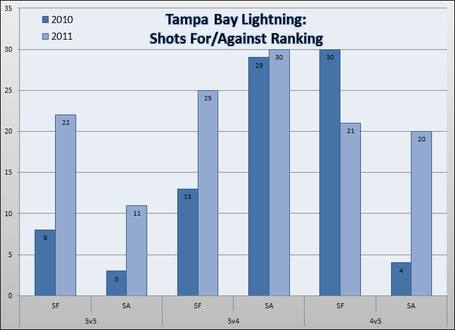 But when it came to special teams, the Lightning weren't nearly as good. Their power play was decent at generating shots, but they couldn't seem to keep control of the puck as much as they should have; they were next to last in the NHL in shots allowed. Their penalty kill was dominant, though, coming in at the 4th best in the NHL at preventing shots.

So far this season, though, everything has soured. The Bolts' offense is among the worse in the league at generating shots at even strength -- a fact being masked by their 9.4% shot percentage at even strength (4th best in NHL) -- and their defense has declined. However, their defense still ranks among the upper half of teams, suggesting that their overall defense isn't necessarily a problem. Their real issue lies within their special teams.

If you were to average out the Lightnings' SF/SA rankings for each game state, the results are quite telling: 16th at even strength, 28th on the power play, and 21st on the penalty kill. The Bolts have been terrible this season at generating shots on the power play, and they're allowing the most shorthanded shots against of any team in the NHL. Also, they are allowing considerably more shots against on the penalty kill, falling from the 4th best PK last season to the 20th best this year.

Of course, all these numbers should come with a Small Sample Size warning. Teams spend little time on the power play and penalty kill over the course of the season (at least, when compared with even strength), so it's difficult to get a handle on a team's talent level in those situations. It's possible that the Bolts were playing over their heads last season, but it's also quite likely that they are under-performing this season and should improve over the later half of the year.

I believe that the Bolts are under-performing right now and will improve on the PP/PK, but the question is, how much? As pointed out over at Raw Charge recently, the Lightning need to play incredibly well over the later half of the season in order to make the playoffs. Even if we expect the Bolts' PP/PK performance to regress, they still look like an overall weaker team than in 2010-2011.

If you're like me, these stats only bring up even more questions. Why has the Bolts' even strength offense declined so much this season? Are there any players on the PP/PK squads that should be swapped out? How much of this decline is a result of Mattias Ohlund being out for the season? Do the Bolts have what it takes to dramatically improve over their performance so far this season?

I wish I had answers to all these questions, but at the moment, I simply don't know. Those questions will have to wait until next time. For now, here's hoping the Bolts can keep up their hot streak and put these special teams problems behind them.

For more on the Lightning, drop by SB Nation's blog on the Bolts, Raw Charge. For my full archives of hockey analysis, check out the Rats N' Bolts section here at SB Nation Tampa Bay.