The Tampa Bay Lightning need a strong showing tonight against the New York Rangers if they want to stay in the playoff conversation. As always, this battle will be decided in the net.

If the Tampa Bay Lightning want to make a serious run at the playoffs, tonight's game against the New York Rangers is a make-or-break opportunity. The Lightning have been hot in recent weeks, riding a 6-1-1 streak that has buoyed their playoff hopes and kept them a mere nine points out of a playoff spot, but the Rangers will be a fresh challenge. They are currently the top team in the Eastern Conference with 71 points (33-13-5), so the question remains: do the Bolts have what it takes to hang with the best teams in the league down the stretch?

Despite the large disparity in the team records, the Lightning should easily be able to hang with the Rangers...from an offensive perspective, at least. The Bolts have actually been slightly better than the Rangers this season at controlling the puck, and they have the best 5v5 shooting percentage in the NHL (9.9%). They may have lost their last game to the L.A. Kings, but it wasn't because they couldn't control the puck or get off shots: 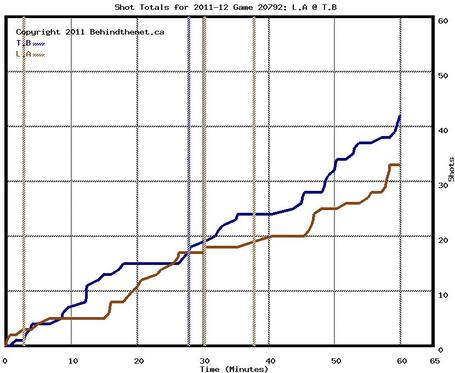 Instead, the Lightning struggled against the Kings because they couldn't get their shots past a dominant defense and keeper (Jonathan Quick). And against the Rangers, the Lightning will face a similar challenge; how do they solve a problem like Henrik Lundqvist?

At 29 years old, Lundqvist is in the middle of his best season yet. His .939 save percentage is tied for the best in the NHL with Brian Elliot (St. Louis Blues), and he's been the driving force behind the Rangers' success. While the Bolts have a better shooting percentage, higher shot totals, and better puck control than the Rangers, their goaltenders have struggled to post a save percentage higher than .900.

Say what you will about the Lightning, but despite all the issues with their team, they have a very real chance of upsetting the Rangers tonight if Mathieu Garon or Dwayne Roloson get hot. As we've this season, though, that's a big "if".