Joe Maddon, Your Awesome 2012 AL Manager Of The Year

Share All sharing options for: Joe Maddon, Your Awesome 2012 AL Manager Of The Year 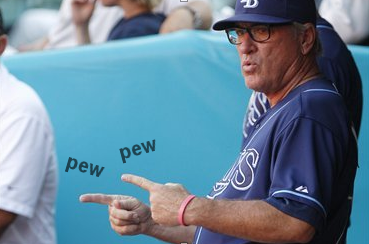 The BBWAA today announced that Rays manager Joe Maddon is the 2012 Manager of the Year (AL). And rightfully so!

The Tampa Bay Rays started the season 0-6, lost their DH to a drug test, and then went to 1-8. Little did Rays fans know, but that was the last time they would see a losing streak longer than three games — much less a six-game streak.

In fact, the team only got hotter as the season progressed — six of the Rays' eight 5-game winning streaks came in the final two months of the season as they caught the Boston Red Sox and surprised everyone with an improbable Wild Card spot.

The team that lost everything in the 2010 off-season had a chance to win it all in 2011. And Joe Maddon deserves a slice of that credit.

And it was an amazing season. From the very beginning — all the way until the ALDS — Maddon kept telling his players, "We are the best 0-6 team in the history of Major League Baseball." For the club to lose two of its biggest offensive components — Carl Crawford and Carlos Pena — and still keep a positive frame of mind the season start in a tailspin, Maddon had to work some serious manager magic.

Maddon kept his players loose and excited to work — from the bitter beginning all the way to the bittersweet end in October. And when the Red Sox players were keeping too loose, sneaking beers and fried chicken about the stadium, the Rays players were only getting hotter.

And outside of the personality-management aspects Joe faced, he also had some hefty in-game ones to handle too.

One of the biggest strategical challenges facing Joe Maddon was managing a bullpen of entirely new faces. Everyone but the long man — from the closer to the LOOGY — left via free agency. And, as it turns out, the long man was ineffective too.

But, as I believe Rob Neyer of Baseball Nation once noted, bullpen success is about good management, not necessarily good pitchers. And Joe Maddon managed them well, using Kyle Farnsworth and Joel Peralta amply in dangerous situations, and always bringing in relievers at moments predisposed towards their personalized success — and with defensive alignments poised to take advantage of each hitter's most subtle weaknesses.

At FanGraphs, we have started looking into exactly how much a manager effects his team, and though the process is very difficult, it has been almost universally agreed that if Maddon does not come out on or near the top of a certain calculation, then we can safely throw that one away. Maddon is widely believe to be a game management wizard and an ego management savant.

Which brings us to this:

How on earth does Maddon not even end up on the ballot?! That is seriously a crime against baseball.

This writer should be stripped of his voting rights! Chris Assenheimer — wait! ... Assenheimer? ... That's seriously his name?

Okay, well, whatever. I guess we can take it easy on the poor little fella. He probably just filled out the ballot wrong. I mean, how can you hate on a guy to whom life has already handed an Assenheimer-whooping?

But seriously, Maddon is most certainly one of the top three managers in the AL, and quite likely the best in the majors. This is a manager who talks about "mental at-bats" and describes the strike zone as "amorphous." This is a man who has had more hair styles than hairs in his time with the Rays! This is a fellow who orchestrates team-wide cosplay events!

Did you enjoy this article? If so, check out our daily live radio shows as well:

Joe Maddon Wins AL Manager Of The Year, Rays Hoping To Extend Him