After the Rays reportedly signed Jose Molina to a one-year deal, people have begun asking: "Are the Rays running out of options at catcher?" Well, they dumb.

Rumor has it, the Tampa Bay Rays have signed catcher Jose Molina to be, presumably, their backup catcher behind John Jaso. Jon Hanford is saying it is a 1-year deal with an option (likely a team option; the Rays love team options). DRB was the first to report it, to my knowledge, but they won't be the first to try to explain it though.

In 2011, he actually had a near-career-year with the bat, hitting .281/.342/.415 and three homers with the Toronto Blue Jays. But expecting anything from Jose but hitting frustration is crazy. The man is a verified liability as a hitter.

So, look, there's no way to sugar this turd: Jose Molina cannot hit. He knows it. The Rays know it. The league knows it.

But what Molina can do: Frame some pitches and play some defense. And play it well.

The Rays Method, for years now, has been to take advantage of cheap players who field exceptionally well. Year after year, the Rays lead the league or live near the top in all advanced fielding stats and in run prevention. They shift their outfielders and infielders more -- far more -- than any other team, and they find cheap guys -- like Gabe Gross in 2008 -- who field exceptionally and hit, eh, they hit kinda.

Molina fits that category, and -- like Gross -- he will not be expected to play every day. At age 37, Molina will likely only get 200 or so plate appearances, starting against tough lefties and coming in as a defensive replacement.

Which is fine, because, I repeat, Molina can play some series defense. Earlier this year, Mike Fast of Baseball Prospectus executed some phenomenal research in which he determined Molina was unrivaled in framing pitches. Fast's research indicated that from 2007 through 2011, Jose Molina saved 73 runs for his teams -- just through framing alone!

In a single season, 35 runs is worth almost 3.5 victories. Tack on the fact that extra called strikes means fewer pitches thrown, which means more innings pitched by starters, which means better-rested bullpens.

Look at Molina's strikezone according to Fast: 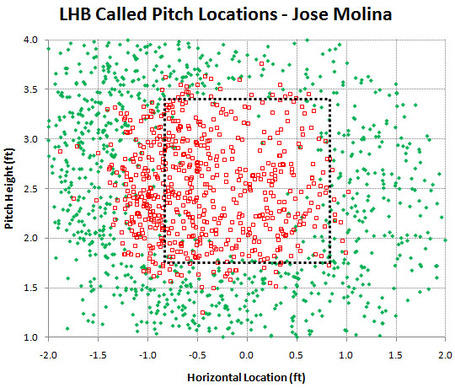 Compare Molina and [Ryan] Doumit’s movements in the following pitch animations. Despite Doumit’s solid stance and subtle glove movement, he dropped his head to follow the pitch into his glove and he hunched down slightly, as if he were trying to coax the ball carefully into his glove. Molina’s head stayed mostly stable as he received the pitch.

Molina has a gift. There is no one like him in the majors right now -- and because of that, he's dirt cheap and pretty much only like three other teams even realize he is. He is exceptional: 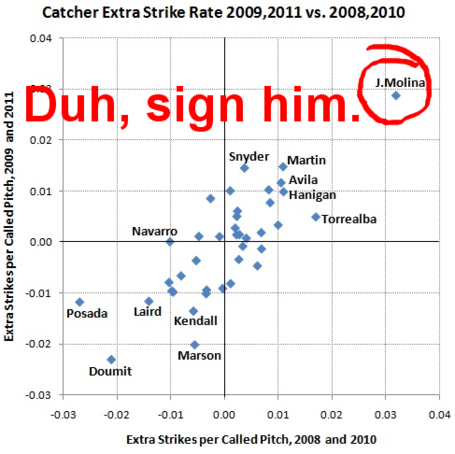 Altogether, Molina could be worth 3.0 to 4.0 wins -- even if he's unable to hit oxygen with his bat. Last year, John Jaso and Kelly Shoppach -- neither of them defensively above average -- combined for 1.6 wins of value (according to FanGraphs WAR).

Suddenly, the catching situation looks less like a tutor-tutee relationship between Molina and Jaso, but more of a possible legit competition for playing time.

Jaso is coming off a bad offensive season, and his defense is so ugly he needs good offensive seasons. Were near-prospects Robinson Chirinos and Jose Lobaton not on the cusp of the majors, one could reasonably expect Molina would earn full-time PAs if Jaso gets hurt or remains ineffective.

Don't listen to the oxygen suckers who will spout on about how the Rays are desperate and obviously couldn't afford anything better.

The Rays aren't desperate. They're brilliant.

And Jose Molina is special.