According to Marc Topkin from the St. Pete Times, Florida Governor Rick Scott has agreed to throw out the first pitch at the Rays' home opener on April 1.

I'm not about to get into all the politics swirling around Scott, but this is certainly suspicious: 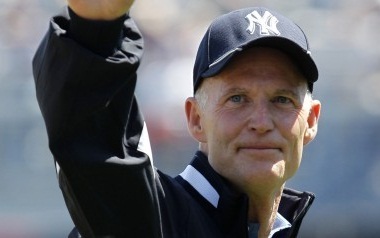 Scott threw out the first pitch to a Yankees' spring training game this past weekend, fully adorned in Yankees gear. On one hand, I can understand his appearance: the Yankees have a long history in Tampa and there are plenty of Yankee fans in the area and state. But at the same time....c'mon now man. First you ditch a proposal for a high-speed rail line that could help the Rays increase their attendance, and then you go and make a public appearance decked out in Yankees gear?

Thankfully, Tampa Bay fans stood strong, booing Scott during his time on the mound for the Yanks. Who knows whether it was for his politics or his baseball cap - I guess we'll find out on April 1, though.