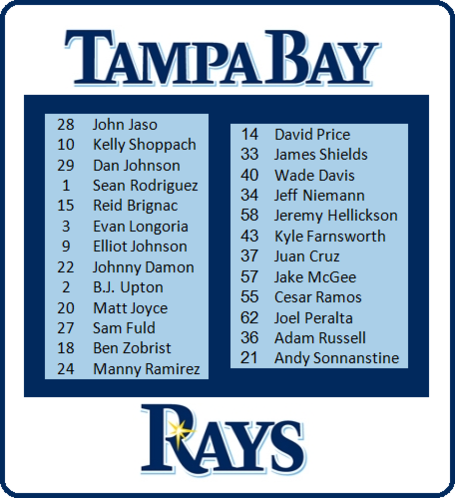 Going into the spring, there weren't too many questions about the Rays roster. Almost all the positions were already filled, with the only real questions circling around the bullpen members and the last spot on the bench. The Rays deliberated over these decisions, taking until yesterday to decide the final composition of their bullpen, but none of these decisions were too surprising.

Kyle Farnsworth, Joel Peralta, and Andy Sonnanstine were essentially guaranteed bullpen spots, as was Adam Russell despite his underwhelming spring performance. Cesar Ramos was the best, most experienced option the Rays had for a LOOGY (Left-Handed One Out Guy), and the only way Jake McGee didn't make the bullpen was if the Rays wanted him to work on becoming a starting pitcher instead. The biggest surprise was probably Juan Cruz, who showed he was healthier than most people had assumed going into the spring, winning himself the final bullpen spot.

As for the final bench spot, the decision between going with Felipe Lopez or Elliot Johnson came down to flexibility. Lopez is, without a doubt, the better hitter of the two players, but he's also much more one-dimensional. Lopez is a liability on defense and can only reasonably be expected to play a handful of positions, while Johnson can play average defense around the infield while also providing above-average baserunning. The Rays value defense and versatility, and so Johnson got the nod for the final spot. That said, if Lopez impresses down in Triple-A, I wouldn't be surprised if he got called up a few months into the season.

The biggest surprise of the spring had nothing to do with these two battles, though: a few weeks ago, Maddon announced that he'd use Wade Davis as his number three starter instead of Jeff Niemann. Considering Jeff Niemann pitched well for the majority of the 2010 season while Wade Davis had his occasional struggles, this surprised many casual fans. However, Davis significantly improved as the season went along, while concerns about durability and injuries still haunt Jeff Niemann. In the end, this decision has a minimal impact on how the 2011 season plays out, but it makes for good spring training news and gossip.

With the above roster, the Rays project as an 86-90 win club. That projection will obviously change as the season unfolds - players will get injured, J.P. Howell will be added to the bullpen, players will over/under perform, trades will be made, etc. - but right now the Rays are in a very good spot. They may not be favorites to reach the postseason, but they'll be in the race.