The immediate reaction to Wade Davis’ new contract has almost entirely been positive. I certainly did a small happy dance when I heard the news, as it feels like a relatively small amount of money to guarantee while still reaping the reward of having Davis under contract for so long. Any long term deal is a risk, but the Rays are investing in a young player with a good work ethic and clean medical history – you can’t really ask for anything more than that.

But I do think there’s something that everyone is overlooking in the immediate aftermath of this signing: namely, the Rays seem to really, really like Wade Davis. Consider:

Those first four years of the contract seem like a small amount of money to guarantee, but I actually think it’s a very fair deal. If the Rays had decided to take Davis year to year instead of signing this contract, they could have paid Davis the league minimum these next two seasons and then taken him to arbitration twice. For the Rays to pay Davis the same amount in both scenarios, the Rays would have had to pay Davis at least $11.8M in his first two years of arbitration ($12.6M minus $.8M). How does that stack up with other pitchers around the league? 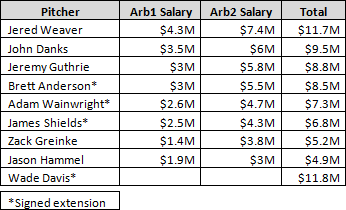 To be fair, this chart is misleading in a couple ways. Each of these pitchers was in a different set of circumstances when they reached arbitration (different age, career path, etc.) so you can't make apples-to-apples comparison between all of them. Also, some of these contracts happened a few years in the past, and prices have inflated since then. And technically, Wade Davis will probably only be paid around $8-10M for this two arbitration years, as the Rays likely structured the deal so that Davis is getting around $1-2M each of the next two seasons.

But still, the point remains that if the Rays had wanted to, they could have taken Davis year to year and paid less for him in arbitration than they will with this contract. They're paying Davis more for those two arbitration years than they did Shields, and they're paying him a similar amount that Adam Wainwright and Brett Anderson received in their contract extensions, yet Davis has not proven himself at the major league level to the extent that they had.

While this contract may seem like a minimal investment at first glance, the more I look at it, the more it looks like a big vote of confidence in Davis. The Rays are taking on risk by guaranteeing Davis this much money for four seasons, and they're assuming that Davis would be worth at least this amount of money if they were to take him to arbitration. The payoff for the Rays comes in two scenarios: if Davis develops into a pitcher who'd be worth much more than $8-10M through his first two seasons of arbitration, or if he's such a long term stud that it makes sense for them to renew his 2016-2017 options.

In other words, if Davis only becomes a league average, 2 WAR pitcher, the Rays wouldn't be overpaying for his services per se (2 WAR normally is worth $8-10M on the free agent market), but they could have gotten Davis for much cheaper if they had taken him year to year instead. Combine all this with the fact that the Rays slotted Davis in as their number three starter, and I'm all of a sudden very intrigued to watch Davis this season. He was a highly ranked prospect at one point, and I think the Rays still feel he can turn into a top of the rotation starter.