Spring Training 2011: What it Means for the Rays

What does spring training really mean? Or more importantly, what does it mean for the Rays?

Share All sharing options for: Spring Training 2011: What it Means for the Rays

We are less than a month away from major league baseball's Opening Day, and Spring Training is in full swing. Naturally, this should raise a very important question: What does spring training really mean? Or more importantly, what does it mean for the Rays?

There is no title in the spring training leagues, only bragging rights. A team could end the preseason with only two wins. It doesn’t matter. Spring training is the opportunity for teams to test new players, sometimes at new positions, and to transition the organization into playing ball again.

The Benefits of Spring Training

Simply put, major league starters get to workout in a game scenario, minor leaguers can compete for open bench slots, and managers get a chance to test the full roster on the field while scouting the opposition. Win or lose, three homers or none, the score could be 17-0 and both teams will accomplish what they set out to do. A spring training game will feature a major league player for about three innings a game. If the team implodes once the veterans take the bench, it is likely for good reason, and now the coaching staff can assess their minor league assets more carefully.

For example – the Rays face an exodus in the bullpen this off-season. This spring will give the club a chance to match up pitchers from every level (MLB to single A) against other teams in the Grapefruit League. In game scenarios, manager Joe Maddon will be able to match new pitchers - like closer-hopeful rookie Jake McGee – against a major league ready offense to strike out the side. If he gives up a run and the Rays lose, the team is not penalized in the standings. On the other hand, the team now has a better idea of how McGee might perform in similar situations down the road. And he might see more play on Wednesday.

The Temptation of Statistics

As a Rays fan, the moment spring arrives the temptation to compare across the AL East does as well. Who's pitching for the Yankees today? How many homeruns have the Red Sox put up? Are the Orioles winning games? Are the Blue Jays a threat? Legitimate questions, but until that first pitch on April 1st, there's something very important to remember: the statistics mean nothing.

The Rays prevailed first in the Grapefruit League for 2010 & 2008. In 2008, they would lose the World Series to the Phillies, who finished 12-18 that preseason. The ’05 White Sox and ’03 Marlins also had losing records after the spring and still walked away with a championship. In fact, over the last ten years not a single team has won the world series and their spring league. The Rays have started the spring with a low win count, but history shows it will have no bearing on their regular season performance.

Statistics get even more trivial at the player level. In the last two years, only Ryan Howard, Mike Wilson and Chris Johnson could hit eight or more homeruns. 2010 strikeout leaders were Francisco Liriano,  Matt Garza and Ryan Dempster. While these statistics can be fun to read and compare, they are clearly no rule of thumb for your fantasy draft. The goal of spring training is not statistics. The numbers are often meaningless. 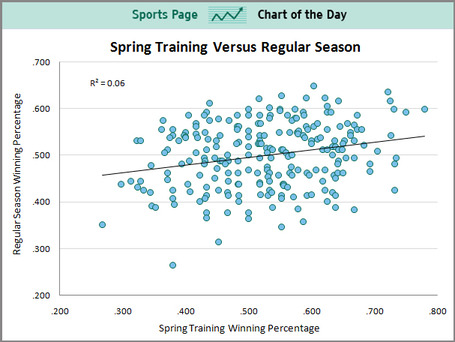 Business Insider posted this graph two weeks ago in their sports section. As you can see, there is almost NO correlation between a team's spring training and regular season performance.

What To Watch For

So what should you, the Rays fan, be looking for in spring training this year? There are multiple places on the field that need addressed this offseason, normally with one or two viable candidates to fill that role. Spring training is the opportunity to sort those decisions out. With the full organization in Port Charlotte, there is a feeling that many positions (like in the bullpen) are up for grabs.

Spring is the chance for our young Rays to compete for these open slots. The bench, the bullpen and the starting rotation need sorting out for the 25-man roster, which will take a lot of work. For example, after the Matt Garza trade, rookie Jeremy Hellickson appears to be a lock for the role of fifth starting pitcher; but other starters from AAA Durham will be training along side him, showing off their stuff. Truly, any of them could make the roster. Every role on the field must be earned.

Other candidate positions to watch develop:

(note: Ramirez likely to start the year as the Designated Hitter)

For more information on the how the bullpen plays out, as well as the positions mentioned above, stay connected to our Rays-focused affiliate DRaysBay and look for updates on our main page. These questions may appear difficult to answer, but they are something every organization faces in the month of March. Even if you feel overwhelmed, remember the Rays are still projected at ~90 wins for the fourth consecutive season! With two AL East titles in hand, we have good reason to stay confident this spring.