Entering the fifth inning in tonight’s game between the Tampa Bay Rays and Chicago White Sox, Wade Davis had been cruising. He had a rough first inning, throwing 27 pitches while walking two and allowing a double, but since then he’s settled down and mowed through the White Sox with ease. Through the next three innings, Davis allowed only two more baserunners and kept the White Sox off the board.

John Jaso hit a two-run homerun in the second inning, and Davis has been protecting the meager lead since. The fifth inning was a bit of a challenge, though: Davis started the inning by allowing consecutive singles to A.J. Pierzynski and Alexei Ramirez. He then struck out Mark Teahen on a high, inside fastball, but Juan Pierre came up to the plate and hit a deep fly to right field. Off the bat it looked like a sure double, but then Matt Joyce made his presence known: 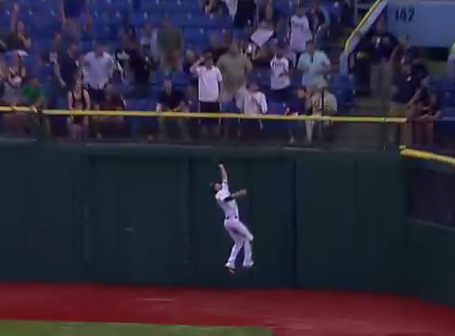 Davis then got Gordon Beckham to pop out to end the inning and the threat. The Rays entered the bottom of the fifth inning with their 2-0 lead intact.