With their first of ten picks in the first round, the Tampa Bay Rays have selected Taylor Guerrieri with the 24th overall pick. A high school player Guerrieri has a fastball, curve and change that can take him to the top of any team's rotation. A strike thrower and power pitcher, Tampa has huge upside if Guerrieri drops his commitment to South Carolina. There is certain risk in drafting a teenager, but as Keith Law notes: big G is a top ten or twelve on talent alone.

This is a deep draft for pitchers, and six of the last seven before Tampa's was an arm. The first pick of ten may not sound exciting, but even one pick would be worth notoriety. Here, the Rays started with a bang by choosing Guerrieri. 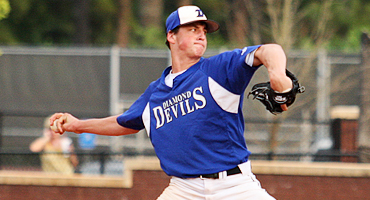 Guerrieri will be one of the toughest calls for clubs in the first round. He has one of the draft's best arms... Guerrieri has a pitcher's body at 6-foot-3, 195 pounds with long arms, coat-hanger shoulders and present strength. Getting his "man strength," to use the scouting term, has allowed him to maintain his delivery better, and his stuff has improved as a result. At his best, Guerrieri's fastball touches 98 mph and sits in the 93-96 range. He throws his curveball with power as well at 80-83 mph. He flashes a changeup and a cutter in side sessions but rarely uses them in games. Like most high school pitchers, his velocity can vary from start to start, but he still sits 91-93 on his off days. His athleticism and strength allow him to repeat his delivery well, though his command is a question.

Keith Law feels Guerrieri will "need to throw more quality strikes and develop a consistent third pitch, but the arm strength and potential for a plus breaking ball is very enticing." If Guerrieri is a bust (in talent or commitment) the Rays have nine more picks to go. If the Rays did not have so many picks, such flexibility would not allow Tampa Bay to take risky picks. Tonight the upside was enough and the Rays may have bagged a top ten talent twice as late in the draft.