The Tampa Bay Rays take their second and third picks of ten in the first round back-to-back with #31 and #32. Notably still available are OF Josh Bell and LHP Dale Norris. The draft room looks easy and relaxed.

Originally drafted by the Marlins, he committed to LSU to follow family footsteps with the Tigers. He leads the SEC in stolen bases and batted .383 last year. Some call him a true center fielder and could have been drafted in the high teens had there not been a bank-run on pitchers. Mahtook could be a five tool player and Jim Callis was quick to point out, "College athletes with solid tools across the board and big performance in SEC usually don't last until No. 31." This was certainly a best-available pick. 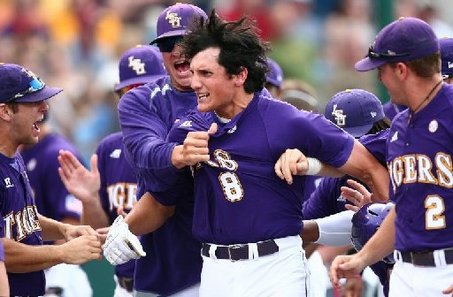 Mahtook wears the uniform well with an excellent baseball body. He's got very good bat speed and with good mechanics and looks like he should be an above-average hitter at the next level. He hits to all fields, with his power -- which should be Major League average -- coming mostly to the pull side. He'll overswing at times, though that may be more due to his aggressive style than his lack of approach at the plate...

Defensively, he's got the ability to play anywhere in the outfield. His arm is fringy average, but it's fairly accurate, and his all-out play and good instincts allow his average range to play up.

Baseball America ranked this high school player outside the top 100. He's commited to Arizona State, but the Rays continue to take shots at high school phenom's, comfortable with spending picks on potential busts for the chance to land a player thought untouchable at such a young age. Jim Callis is not as supporting with this pick noting, "they could have waited a while on that one." 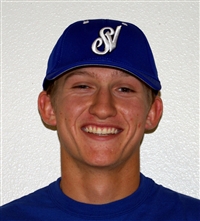 Hager doesn't have one standout tool, but he can do a little bit of everything and always plays hard. He's an average runner but has nice actions at shortstop with an above-average arm. Hager is a good hitter and performed with wood at showcase events last fall. He has some pop, though he profiles as more of a gap hitter with average power. His tools play up because he's the prototypical baseball rat. He has passion for the game and is typically the dirtiest guy on the field, playing with toughness and energy. He's a leader on the field with good makeup, exactly what you want from a shortstop. He could go as high as the second round and if he doesn't sign, he'll head to Arizona State.

Across the board writers are skeptical at this pick. Such a high choice used on Hager is quite a vote of confidence from the Rays. The high leverage pick could have been used on a college player ready for the big leagues, but the Rays used their first and third of ten on high school athletes. Such confidence could sway the players to sign, but the risk is high for these picks to be a wash.