The Supplemental round has begun.

Another high school player, Martin is a five tool infielder. He committed to Oregon State (an incredible program) and has worked out well for major league scouts. The Rays have ten picks in the first round – three have been high schoolers and two have been shortstops. Tampa Bay is pursuing athletes.

Martin was connected heavily with the Yankees, but the Rays were able to swoop in before he dropped that far.

[Martin] worked hard to add muscle in the offseason, and it paid dividends at the plate. Scouts used to question his bat, but now they praise his line-drive swing and bat speed…

He’s a good high-ball hitter with an aggressive approach, and he could mature into a solid-average hitter. An average runner, Martin is a fast-twitch athlete who can make highlight-reel plays at shortstop, though he has plenty of work to do there. He has good range and a strong arm with good carry, but he’s also an upright defender who tends to field balls deep and needs to smooth out his actions. He has a quiet personality but is a good teammate and a hard worker.

Martin can play nearly every position, so the SS label should not be taken seriously. Convincing him to skip out on a college career at Oregon State should prove very difficult.

A UCLA commit, the Rays have gone after another high school player. He is slender but projects to have power and durability. Goeddel is suspected to be an easy sign to the big leagues. 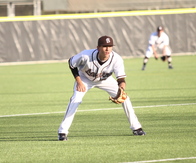 His brother, Erik, is a pitcher in the Mets organization, drafted out of UCLA last year. Tyler has a gangly and projectable 6-foot-4, 170-pound frame. He’s also a well above-average runner, athletic enough to play third base, though his speed may be best utilized in center field. Goeddel has above-average arm strength and shows intriguing tools at the plate. He takes aggressive swings with bat speed, and his bat head stays in the hitting zone for a long time.

Ames is a power pitcher with a high strikeout rate. He is committed to Oregon, but may be eager for the big leagues. He has been a followed talent for some time now, he was drafted by the Phillies in 2009 (46th round) and the Rockies in 2010 (30th round) but turned both selections down. Even still, this is another early pick for the Rays.

… sitting 92-95 mph and touching 97 in the West Coast League, ranking as the league’s No. 3 prospect. His stuff has held up this spring, as his fastball has been consistently in the mid-90s. His fastball has nasty, riding life and arm-side run. His breaking ball doesn’t always show the tight break scouts like to see, his changeup is just all right, and he does pitch with some effort, but he should go high enough this year to keep him away from his commitment to Oregon.