The MLB Draft moved quickly last night and we posted a lot of scouting reports here on SB Nation Tampa Bay, so it was easy to get lost within the piles and piles of writing. Wait, who got drafted again? Who's that player? What position does he play? The Rays drafted so many names, it's difficult to keep track of it all.

So to help out, here's a quick summary of the Rays 10 first-round picks in the 2011 Draft: 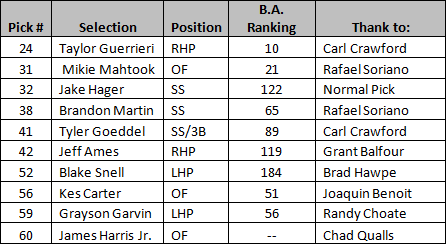 It's pretty obvious to tell that the Rays reached a lot in the middle section of the draft. They definitely got good deals on the bookends -- even though Harris isn't ranked within BA's top 200, Goldstein is very high on him -- but some of those middle picks leave you scratching your head. Were they sign-able guys, and the Rays tried to balance reaching for top talent with cheaper players? Or are the Rays simply much higher on these players than other places? Baseball America, while excellent, is far from infallible - it's entirely possible the Rays saw things in these players that they believed would case them to be underrated by most people.

It's impossible to tell at this point how any of these picks will turn out, so it's worth remembering that all these picks are essentially crapshoots. While a handful of them may work out, the vast majority of them probably won't -- that's just the reality of draft picks, even first round picks. So even if the Rays gambled with some players tonight, it may work out in the end that their luck works out and these players succeed -- who knows?

At the very least, the Rays got two great picks in Taylor Guerrieri and Mikie Mahtook. I hesitate to call this draft great, but considering the amount of picks the Rays had, they could afford to take some gambles. Now we'll just have to see how many of them pan out.