Share All sharing options for: Rays Vs. Athletics: Rays Win 10-8 As Wade Davis Rebounds And Desmond Jennings Drive in Four

I was this close to turning off the game in the first inning. Wade Davis was only one out into the game, but had already thrown 36 pitches and allowed five runs, and i was ready to call it quits. After staying up late to watch the Rays roll over and die for three nights in a row, I was finished and done with the Rays. 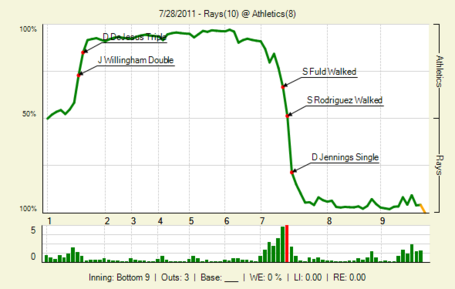 After that disastrous 0.1 innings, Wade Davis went out to throw a masterpiece: 5.2 IP, no hits, no walks, and six strikeouts. He looked like an entirely different pitcher than we’ve seen this year. He was pumping his fastball up to 95 MPH when needed. He was mixing in his curveball (19%) and slider (11%) way more than he has at any other point this year. And he was getting the Athletics to swing and miss on pitches, generating a total of 10 on the night.

I know I should probably be disappointed that Davis let up five runs in this start, but honestly, I could care less. He’s alive! It’s so incredibly refreshing to see this Wade Davis again — you know, the one that is actually a good pitcher. It’s taken him 19 games and 100+ innings to finally show up, but here he is. Now let’s hope he sticks around.

But not only did Wade Davis pitch well: the Rays’ offense actually decided to show up. The Rays inched closer on Desmond Jennings’ two-run homerun in the sixth inning — the first homerun of his career — and then the Rays burst out of the floodgates, scoring seven runs in the seventh inning. Desmond Jennings had the go-ahead hit, driving in two runners on a single with the bases loaded, and then the Rays tacked on some insurance runs from there.