Casey Kotchman leads the team in wOBA and has been this season's surprise first-half batting MVP.

Baseball breaks into four basic elements: Pitching, hitting, fielding, and base running. There are more deviations within and around these four elements, but these four are the most important. For the Rays, hitting has been a problem. Since 2008, when the team turned the corner and reached the World Series, the Rays have found success using the formula of elite pitching and defense.

This has left the Rays hitting usually around league average (despite that, they have scored the sixth most runs in the majors since 2008). Since defense has the most importance to the Rays, they must cull as much offense as possible from the less-important defensive positions -- namely first base, right field, and the designated hitter spot.

One of the best tools for measuring a player's output is wOBA, or weighted on-base average. It is a statistic that equally weights events (such as homers and singles and walks) according to how many runs they produce. In the eyes of batting average, a home run and a triple and a single all equal 1, which incorrectly defines their importance. (Also, batting average completely ignores walks, which, frankly, is hella dumb.)

Moreover, Ben Zobrist has returned to Zorilla form, hitting 10 homers, sporting a .368 wOBA, and swiping 8 bags. His impressive return to previous production (after suffering through a merely above average 2010 season) has once again made him one of the league most affordable and valuable assets.

But the Rays mid-season batting MVP needs to be Casey Kotchman. After failing miserably in Seattle last year, Kotchman has defied all expectations in 2011 and assembled an impressive first half. Never known for his power, Kotchman has only slugged 3 homers this year, but he leads the team with a .378 wOBA and has reached base in over 40% of his plate appearances.

Going into the season, the Rays were looking for production to fill the place of the departing Carlos Pena, who has been one of the league's best home run hitters over the last five seasons. Initially, they had Dan Johnson slated to play first, but Kotchman easily outperformed him as Johnson struggled to find his his 2010 production.

In an honest examination of Kotchman's first half, I have to argue it has been a fluke, but an undeniably valuable fluke. He has provided key offense (and great defense) in a position where the Rays need it most. I would not be surprised if Kotchman loses a little playing time to Dan Johnson, Russ Canzler, or even Leslie Anderson in the second half of this season -- or perhaps if the Rays trade Kotchman or acquire someone like Kila Ka'aihue -- but he has been the single most important bat in keeping the Rays in the race.

Here's hoping the Magic continues a little while longer. 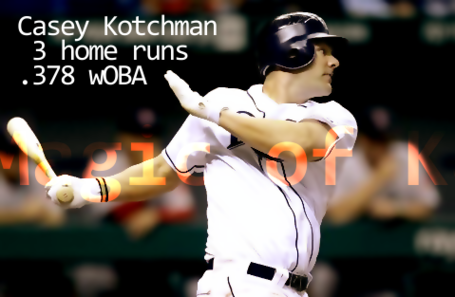