It wasn’t necessarily pretty or easy, but the Rays won. Like a blooper to short that gets caught, it’s a line drive in the record books. And hey, after the first two games in this series, I’m willing to take any sort of win, no matter how ugly.

When I say that last night’s game was “ugly”, I’m only really referring to the Rays’ offense. The Rays managed to get 15 baserunners through 10 innings, but they could only scrape across three runs the entire game. The first of those runs came off Evan Longoria’s 22nd home run of the season, and the second was the result of two consecutive walks and then Johnny Damon doubled to center field. That was almost enough to win the game, but the Tigers found enough offense to tie the game and force it into extras.

In the bottom of the 10th inning, the Rays loaded the bases off a single, hit-by-pitch, and walk, and then Elliot Johnson stepped to the plate. Johnson did about what you’d expect — weak ground ball to third base — but then fate decided to smile upon the Rays. Brandon Inge inexplicably decided to try for the force out at second base, even when he could have easily nabbed Johnson at first, Zobrist at home, or Kotchman at third. Instead, he threw to second base, and Sean Rodriguez — who had been hustling the entire time — slid in just before the throw reached. Game, set, match. 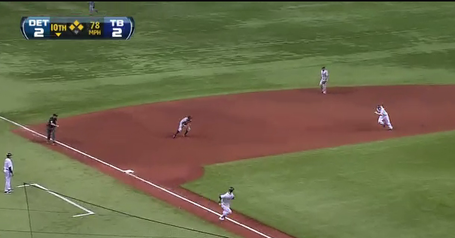 (h/t Jason Collette for the image)

Seriously, awesome job by Rodriguez to be hustling that hard on the play. But wow, it’s still somewhat sad the Rays have reached the point where it takes this much for them to score with the bases loaded.

But anyway, enough of the depressing offense: Wade Davis was spectacular today, which is always a phrase I’m more than happy to write. He threw arguably his best start of the season, lasting a full nine innings and only allowing seven baserunners (four hits, three walks). While he did allow a home run and a handful of runs, he had his pitches working like none other. He was locating his fastballs and blowing them by hitters at 95+ MPH, and he generated 9% swinging strikes overall on the evening. He was getting batters to swing and miss on his curveball and slider, making him look like an entirely different pitcher than he was earlier in the year.

I must admit, I was skeptical that an injury was the real reason Davis stunk earlier this year. Or at least, I was skeptical it was something that could be fixed with something as simple as a trip to the DL. His velocity was way down and all his secondary pitches looked like crap, so it looked to me like it would take a considerable amount of time for him to work through all his issues and pull himself together. But I’m sure as heck glad that I was wrong.