Share All sharing options for: A Casey Kotchman Extension

The Rays have not had a lot to be happy about in the 2011 season. After stumbling through the first half of their schedule, the Rays have nearly exited playoff contention during the second half. One story that has brought many Rays fans joy is that of first baseman Casey Kotchman.

Kotchman, a former first round draft pick and Florida native, has stymied all expectations and hit a mind-boggling .331/.394/.455 slash this season. However, with the 2011 season coming to a close, the Rays need to start thinking about how they will fill their 2012 roster.

With the playoffs nearly out of reach, the final portion of the season can also act as the testing grounds for any possible starter candidate, such as Desmond Jennings, who will likely start in center field in 2012 if and when the Rays trade B.J. Upton.

The tricky issue with Casey Kotchman -- and any player who is having a career year -- is that it predicting the following year can be very tough. Can Kotchman be the second coming of Carlos Pena, who went from minor league free agent to major league super star, or Jose Hernandez, who had two really good and really lucky seasons, but was not all that great otherwise.

Well, on of the scary things about Kotchman's great 2011 season is the fact that it has come largely on the weight of increased singles. From the beginning of his MLB career through 2010, Kotchman's hits looked like this: 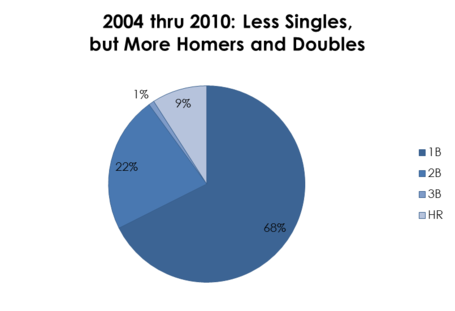 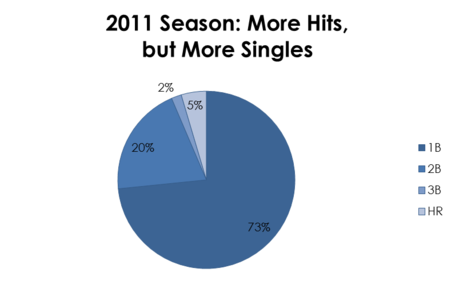 The problem is that Kotchman's improved season has come largely on the merit of hitting more singles. If we look at his results per plate appearance, the problem becomes much more clear: 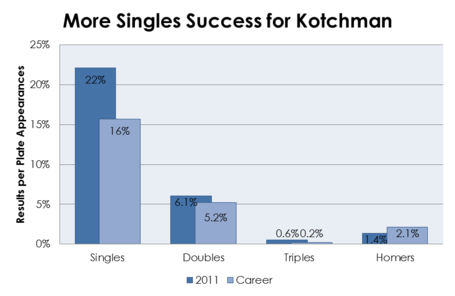 Kotchman has hit fewer homers this year, but a bit more doubles and triples than usual. Singles, however, he is hitting over a third more than he has through his career. Granted, players are constantly changing, getting worse or better in different ways, but few players ever get this much better this suddenly.

The problem appears to be Kotchman has merely gotten very lucky this year. His batting average on balls in play (BABIP) has always been about .280 in his career. Typically, players cannot change their BABIPs -- it is something determined by a player's profile (such as hitting style and speed) and random luck. Since hitting profiles rarely change for the better, BABIPs tend to stay near a specific rate until a player gets older (and thereby slower).

Kotchman's BABIP in 2011 is nearly .360, exceedingly larger than it has been in previous seasons. However, this off season, Kotchman had an operation on his eyes which has since cleared his vision. This may partially explain an improvement in BABIP, but probably not an 80 point improvement. Moreover, he's walking and striking out at rates similar to his disastrous 2010 season in Seattle.

So where does that leave the Rays? Should they anticipate a powerfully bad 2012 season from Kotchman? Does Kotchman's defense offer enough value to warrant a second contract?

Well, first of all, the Rays do not have an MLB-ready first base prospect knocking on the door behind Kotchman. The Rays may choose to trade B.J. Upton this off season for a young slugger, but they may also try for a long-term extension.

The Rays have, in house, a few options available to them, but probably none better than 25-year-old Russ Canzler, hitting an excellent .305/.394/.514 slash in Triple-A Durham right now. However, reports on Canzler's defense have not included many smiley faces, so he could very likely make a better Johnny Damon replacement than a Casey Kotchman replacement.

It comes down to this: The Rays cannot safely assume Casey Kotchman's statistics will be anywhere near where there are this year. However, his defense is good to great and his viable replacements are few and far between. If they choose to offer him a contract next year, it would need to be -- at worst -- similar to this year's minor league contract or -- at best -- a one year deal worth ~$1.5M with a team option year or two worth ~$2M or greater.

Given how the 2012 market for first baseman should flood with names like Albert Pujols, Prince Fielder, and Carlos Pena, Casey Kotchman may find the Rays -- and their straight-jacket budget -- are the best option available to him. And if that indeed is the case, then expect him in St. Pete for at least one more season.