For some reason, I completely forgot that the preliminary schedule for the next baseball season gets released during the current season. Seems odd, doesn't it? I understand that the baseball season is long and all, but there's such a thing as thinking too far ahead. Right now, everyone should be focusing their attention on the 2011 season, not what the 2012 season will potentially look like.

But anyway, I digress. The Tampa Bay Rays season schedule for 2012 has been released and while there's still plenty of time before then, you can count on there being very few changes to the schedule over the offseason.

The Rays will open the season with a three-game series against the New York Yankees, and finish the season with 6 games against both the Yankees and Red Sox in September. In other words, just a typical year for the Rays; you have to beat the best to be the best.

For the full schedule, follow me below the jump. 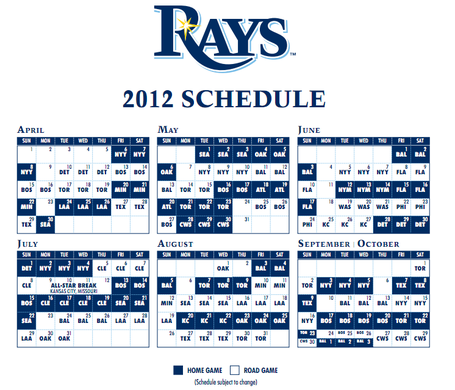