The Rays (74-62) narrowly escaped getting no-hit tonight, but that didn't stop the Texas Rangers (78-60) from slaughtering the Rays pitching and taking the series victory. Jeff Niemann (L, 9-6) started for the Rays, but he barely lasted 5 innings, getting shelled for 5 runs on 6 hits, 2 homers, and 2 walks.

Meanwhile, the Rangers starter, C.J. Wilson (W, 14-6), played the evil surgeon, putting a sickly and all-too-familiar feeling in the Rays fans' guts, pitching a perfect game through five innings. The Rays, though highly successful since 2008, sure have a knack for getting no-hit and perfect game'd, having watched Mark Buehrle, Edwin Jackson, and Dallas Braden all accomplished the feet over the last four seasons.

Well, the Rays narrowly escaped another frowny stamp on the franchise's history books when Casey Kotchman worked a long at bat to start the 6th inning, eventually grounding a ball up towards the middle. Wilson reached out with his pitching hand, apparently hyper-extending several joints on his hand. He finished the inning and started the next, but he had clearly lost his control at that point -- so much so he allowed a solo home run to Kelly Shoppach.

The Texas hitters, meanwhile, clapped 5 extra base hits to the Rays 1, including 2 Ian Kinsler home runs and Michael Young homer. The Rangers lineup has the fewest strikeouts in the league, so beating them must come through well-executed pitches. Jeff Niemann did not have that tonight, and so the Rays had no chance. 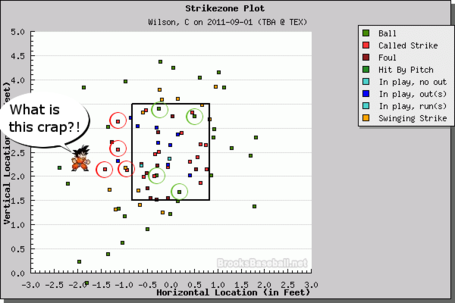 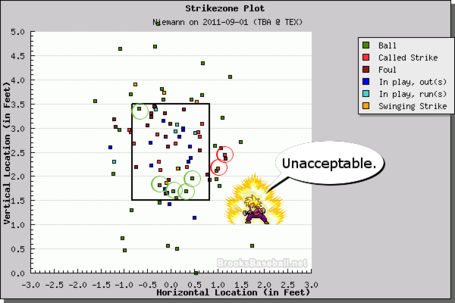