The Rays lose a winnable game as rookie Ivan Nova flusters the Rays offense, and pitcher Wade Davis struggles through the early innings.

Earlier this year, we might have called this a gimme game considering rookie Ivan Nova had yet to show the control necessary to pitch in the majors. Well, since his return to the majors after an early July demotion, he's wrangled his walks under control and been arguably the second best pitcher on the Yankees staff.

That being said, the Rays should not have been shut out tonight. They had a combined 10 different base runners, but Nova had the ground ball working, coaxing 12 ground balls and leaving the Rays with an unfortunate .231 BABIP. 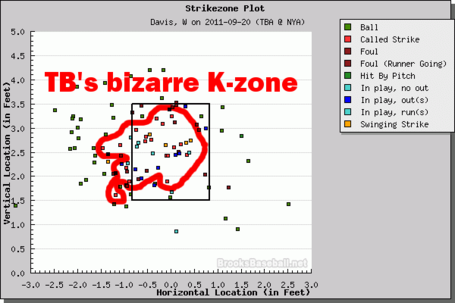 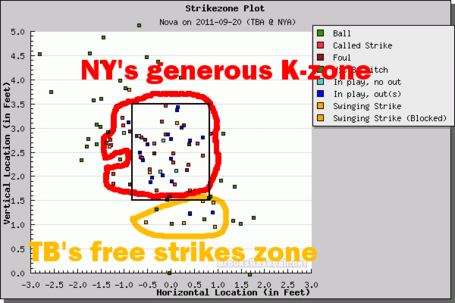 Long story short: Nova did not have great control. The Rays should have killed him tonight.

However, Davis appeared to be struggling with his release point or something because he kept missing in the same, wide, arm-side little zone (that cluster of green on the far left). Bell's crappy zone didn't help either.