The Tampa Bay Rays have a valuable player on their hands, and advanced stats suggest he might be worth hanging on to in 2012.

He strikes out too much. He doesn't hustle. He takes too many pitches. He's a major bust. He's Tampa Bay's Ichiro Suzuki.

A lot of angry ink and spirited protests have been directed at the Tampa Bay Rays' centerfielder B.J. Upton, but I am here to spread the truth and help explain why the Rays were willing to hold onto Upton at the trade deadline in 2011.

Unlike the star centerfielders in the league at present -- folks such as Curtis Granderson, Josh Hamilton, and Matt Kemp -- Upton does not hit an overwhelming amount of homers. This has been a point of major disappointment among many fans, who having seen Upton display homerun power in the minors as a 19 and 20-year-old, wrongly concluded he would Barry Bonds* himself.

*Bonds started as scrawny dude and developed a heavy frame and crazy power later in his career, by legal means or otherwise.

Instead, Upton is now 27 and has a career-high of 23 home runs -- pretty good for a center fielder, but not the 30+ homers initially hope for by some.

On top of that, his batting average is only .257 on his career. Wait, you're not seriously using batting average are you? Here's an exercise from the late, great F.C. Lane:

Of course, neither of us knows unless we name the coins. You could have all quarters and me all pennies.

Likewise, batting average says B.J. Upton's home runs = his singles. Which is not true. Also, they ignore his patience. Despite his rather unimpressive batting average, Upton gets on base well with a .340ish OBP (on-base percentage).

If we take a wholistic look at Upton, a wholly different player appears. Not only is his hitting above average (about 10% above average according to weighted runs created plus), but advanced fielding statistics (from Ultimate Zone Rating to the Fans Scouting Report) indicate he is an above average defender. Fielding percentage -- which does not consider Upton's greatest defensive tools (his superior range and excellent arm) -- does not evaluate him justly.

Putting these stats together, we get a catch-all stat called Wins Above Replacement (WAR) which basically tells us how many wins a player contributed -- on average and ignoring context -- over Joe Minorleaguer.

A typical starting player in the majors will have a WAR at or near 2.0 wins. The top five players in the league in any given year will typically be in the 7.0 to 8.0 win range. In 2011, Upton was worth 4.1 wins.

How does he do it? Well, his hitting, as noted above, is 10% above league average -- a replacement centerfielder would probably hit at league average or below. Also, his base running was again solid -- 36 steals to only 12 caught stealing. Oh, and he was once again preternaturally healthy, collecting over 600 PAs for the fourth straight year.

Altogether, Upton has been one of the top centerfielders in the last five years. Stretching back to 2007, when he became an outfielder, Upton rates as the 6th best CF around: 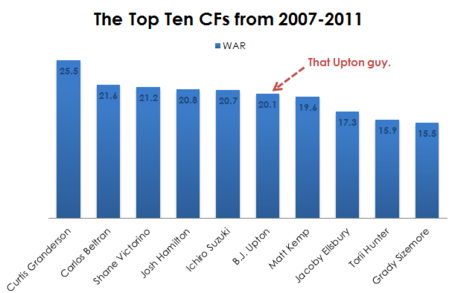 Closer inspection yields a very interesting comparison between Upton and the wildly popular Ichiro Suzuki, who spent some time in CF during that span.

Ichiro, like Upton, doesn't hit many homers for an outfielder. Ichiro also swipes quite a few bags and rates as an overall great defender -- with great range and an amazing arm. Upton actually has a touch more power, making him a sort of in-between of, say Kemp and Suzuki.

Maybe that is why many fans think Upton never reached his potential? He remains an astoundingly valuable player, but has never become one of the extremes -- the light-hitting, fielder extraordinaire or the trudging power man.

Either way, Upton's consistency and health -- his greatest overall assets -- have nearly made him as valuable as the 10-time All-Star Ichiro. They, obviously took different paths to that value. Upton appears to be consistently above average, while a combination of luck and age have made Ichiro relatively more wild: 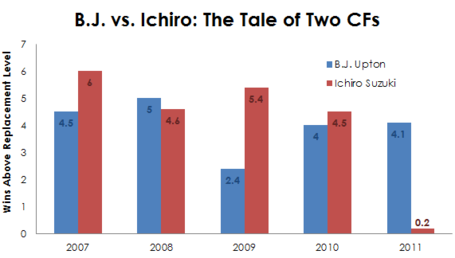 So, does this mean the Rays should hang onto Upton, who will earn increasingly larger paychecks as he approaches free agency? Well, not definitely. If they can convince him to sign an Evan Longoria / Ben Zobrist / Wade Davis special, then obviously, yes.

But! At the same time, it does not mean the Rays are in MUST SELL! mode with Upton either. They can wait for the right offer -- and wait they will.

For more on the Tampa Bay Rays, check out DRaysBay, the SB Nation blog dedicated to covering the new monster of the east.