Carlos Pena brings a powerful bat and some underrated defense to a Rays offense hungry for runs.

The Tampa Bay Rays head into the 2012 MLB Season with perhaps the strongest and most impressive roster in team history. In addition to bringing back the best starting rotation and defense in the AL (3.53 ERA, 54.7 runs saved via UZR), the Rays now boast a compliment of elite free agents -- all acquired at discount prices: C Jose Molina (a defensive wizard), DH Luke Scott (a rebounding slugger) and the singular 1B Carlos Pena.

Pena returns to the Rays after spending the 2011 MLB season with the Chicago Cubs. As a member of Chicago's northside, Pena looked absolutely horrid and broken through the first season of the month -- and yet he still put together a tidy little year, clapping 28 dingers and sporting a dandy .354 weighted on base average (wOBA).

If you don't understand how a fella with a .220 batting average can be an offensive threat, watch this-here video:

So what can possibly be left in the tank for a 34-year-old Carlos Pena?

With the Cubs, he showed he still had his ever-impressive power, hitting only two "just enough" homers while also blasting a pair beyond the 450 ft. mark. Also, his walk rate -- 16.7% of his plate appearances (PAs) ended in BBs -- was nearly the same as his magical 2007 season (16.8%).

Interesting aside: Pena was teammates with Manny Ramirez in 2006. I vaguely recall an interview with Pena in 2007 -- during his amazing home run frenzy -- where he credits Manny for helping him while in Boston. Apparently, Pena had asked Ramirez for "the secret" to which Manny replied (interestingly like Barry Bonds has said, I believe) something to the effect of: "I see the ball really, really well."

After that year, Pena's walk rate went from around 10% to 15% and Los was born. (Note within the note: Before we start going crazy and accusing one of the league's most upright gents of using PEDs, let us remember that taking PEDs does not a great hitter make. It can only help great hitters get greater. I can think of no time it has made a terrible hitter get great.)

Power and patience, as we all know, constitute Pena's only two offensive tools. And he was working those tools in 2011. Granted, he will be switching back to the AL, which tends to be tougher on players, but he has a proven track record of success with the Rays and in their division.

Nonetheless, we cannot ignore his age or the fact that his skillset is the kind that depreciates quickly -- that of a power slugger.

The best way to avoid disappointment with Pena? Hope for just 20 to 25 home runs and a solid .350 on-base percentage. Hope for above average offensive production -- or average first base production (because first basemen tend to hit much better than the rest of the positions) -- and superior defense.

Some have begun to question Pena's defense, but Cubs fans can attest that Pena did more than just catch tosses and touch first. As we see in the video above -- and as ESPN confirms below -- Pena joined the Cirque du So-throwaway in 2011, catching wild and terrible throws from the spurious Cubs infield: 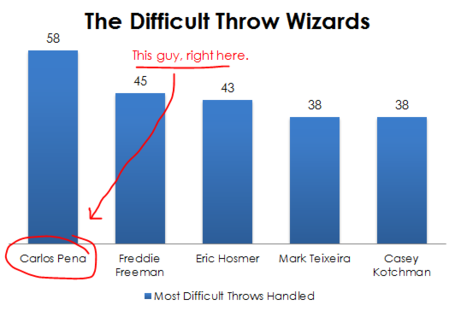 Pena's best defensive assets are still mostly un-captured by modern statistics. Some day, Field F/x will come and bless the Penas of the world with due credit. Until then, we must trust the scouting reports and the word of Joe Maddon, who has said he was as good or better than defensive maven Casey Kotchman.

So, altogether, Rays fans should expect: Solid to great defense and Johnny Damon-like offense (a healthy tick or ten above average).

And for a Rays team that has already assembled a fearsome, almost cheat-code-like pitching staff and defense, but was middle of the pack at scoring runs, Pena's is a homecoming worth celebrating.