SP David Price beat the Los Angeles Angels on Tuesday night, but he certainly did not do it alone.

On Tuesday night, David Price pitched a complete game shutout against one of the league's top lineups -- 1B Albert Pujols and the Los Angeles Angels. The win put the Tampa Bay Rays at 10-7, in a tie with every other AL East team except for the Boston Red Sox (6-10), but if baseball has momentum, the win also gave the Rays plenty of it.

Price had struggled through his first three games. Despite collecting a 2-1 record in his first starts, Price struck out only 11 batters while walking 9 and he finished only a combined 15 innings -- or 5 IP per start. But Tuesday night, Price pitched with a renewed precision and a palpable vigor.

The 26-year-old lefty has two dates stitched into his glove -- dates of the deaths of two dear friends to Price -- and on of them happened to be 4/24/11. Maybe that is why manager Joe Maddon let Price finish the 9th inning despite reaching 119 pitches, but one thing is for certain: He got to the 9th with the help of his fielders and his wicked changeup.

Price managed to coax 11 ground outs from the Angels hitters, inducing 6 via changeups and 7 via his go-to pitch, the two-seem fastball. In previous seasons, Price's changeup was his No. 2 pitch, helping him to dominate right-handed batters with its tailing action and significant difference from the fastball's speed. But early in the 2012 season, Price's changeup has betrayed him more than helped him.

On Tuesday night, Price finally got his changeup working. He managed to keep it away from right-handed hitters and time it properly to induce weak, frustrated contact: 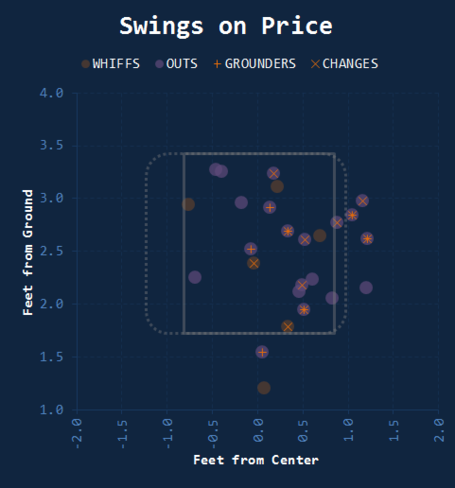 In the above Pitch F/x chart, the pitches that look like asterisks indicate changeups hit for grounders. Interestingly, only one of them came in the lower portion of the zone. It is unusual to get ground outs so high in the zone -- meaning Price's changeup was never where the hitters thought it would be when they started their swing. Even when he went high in the zone, typically a dangerous location for a changeup, the hitters somehow swung even higher.

Price was also locating his curveball very well, getting 9 strikes on 14 curves. He needs to both locate the curve where he wants and find the right location for it, otherwise hitters will key on his other two pitches the second or third time through the order. He managed to do both on Tuesday night.

After a flawless first three innings, Price appeared to lose track of the zone a little in the fourth, but fortunately he had C Jose Molina -- one of the greatest framing catchers in modern baseball -- to help widen the zone.

Here is a look at the zone home plate umpire Eric Cooper called for David Price: 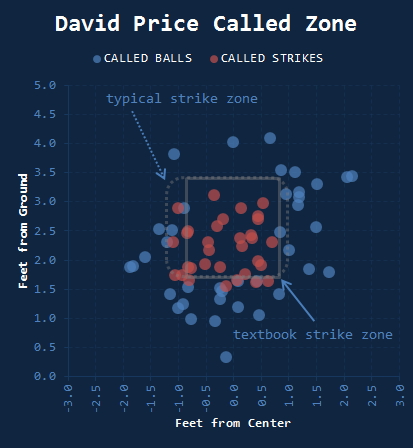 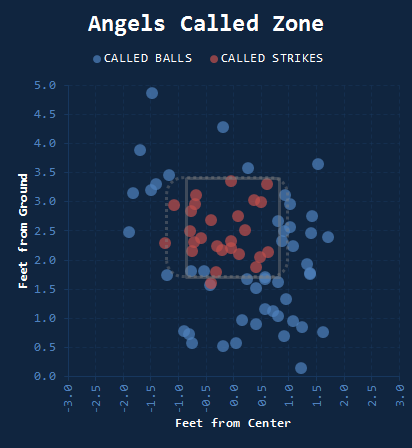 We can see a considerable discrepancy at the bottom of the zone -- the Rays got quite a few more called strikes zone there than the Angels. The vertical edges of the zone, however, appear to favor the Angels. Closer inspection shows that the called balls in the "typical zone" in Price's chart came mostly against right-handed batters -- who have smaller zones to defend usually -- making the outlay of called strikes along the vertical zone rather fair.

The bottom of the zone, which heavily favors the Rays, is a bit more iffy. A batter's height and stance can affect where that zone actually begins, and in-depth research by Mike Fast (now working for the Houston Astros) has shown we do not have a great proxy for determining where that zone should start and end.

But we can say this for certain: The Rays got many more low strikes than the Angels -- who got only one. Is Jose Molina responsible for that? Well, it's a safer bet to say yes than no.

But Molina was not the only defender who helped Price's cause -- RF Matt Joyce had a diving grab to save a bloop single midway through the game, Price himself snared a hot line drive off OF Vernon Wells' bat and SS Sean Rodriguez and 3B Evan Longoria charged several ground balls that could have easily gone for hits or throwing errors.

All told, the game was -- to dip into the cliche reservoir -- a total team effort. The power hitters slugged homers, the pitcher induced weak contact, the fielders swallowed even the hardest-hit balls and the catcher made the zone bulbous.

The Tampa Bay Rays, just like David Price, appear to be finally hitting their stride.