A comprehensive look at the starting and relief pitchers on the Rays roster this season.

With Opening Day upon us in major league baseball, the time has come to take a look at the 2012 pitchers for the Tampa Bay Rays. 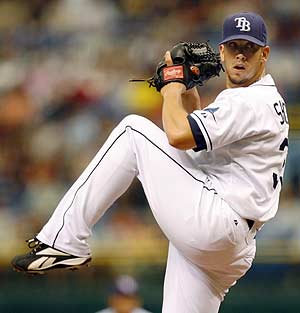 (via)
Rebounding from a down year in 2010, James Shields put up a 2.82 ERA and hurled 11 complete games for 33 started, and that's not counting the numerous games he pitched into the eighth and ninth innings before handing the ball to Kyle Farnsworth. Shields is a war horse, and rightfully at the front of the starting rotation.
For the last two seasons, the resident grey beard (he's 30!) struck out more than 8 batters a game - or 23% of batters faced. Last year was his fifth consecutive year eating over 200 innings, but his first as an All Star. Expect "Fuego G" - as he's called himself - to give the bullpen a rest on the days he pitches and be an All Star once again. Shields is the only Rays pitcher left who has ever worn a Devil Rays jersey, and the club has options on his contract through 2014. He will start for the Rays on Opening Day this Friday.
2. David Price, LHP 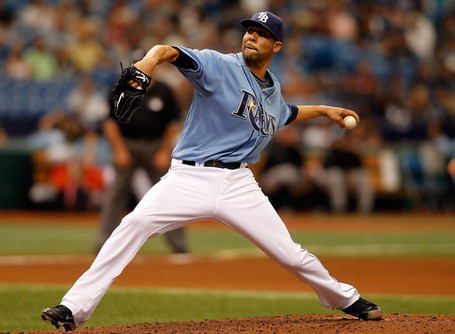 David Price had high expectations in 2011. Coming off a 2010 where he finished second in the Cy Young voting, Price posted career highs in both strikeout rate (8.7 K/9) and walk rate (2.5 BB/9). His record wasn't glamourous, 12 wins and 13 losses, but by the numbers he kept pace. Price had a 3.49 ERA, but a 3.32 FIP, lower than Shields's 3.42. Additionally, the pitchers were matched in terms of worth. Shields boasted a 4.9 Wins Above Replacement in 2011, and Price pitched 4.7 WAR. The key difference is that where Shields is a change up pitcher, fooling batters with slow burners, David Price dials it up. Last year he led the league in whiffs on fastballs!

This year could be another break out year for Price. For comparison, lets look at his career of using SIERA (which is ERA, but removes the effect of the park, defense, and luck) and xFIP (the best measure of how a pitcher should pitch). You read them both like an ERA, the lower the better.

Price has seen consistent improvement, especially over his famed 2010, so big things could be ahead. 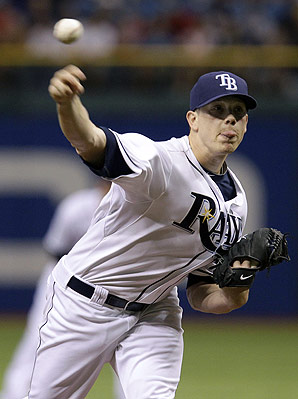 2011's Rookie of the Year, Jeremy Hellickson has great expectations on his shoulders coming into the season. He allowed only 4 runs in his last 17 games, riding a 2-1 record, 3.54 ERA, 1.08 WHIP, 8.0 K/9, and 6.0 K/BB during the final four weeks. On the full season, however, Hell Boy pitched a 4.47 xFIP and averaged a 5.57 K/9 - striking out only 15% of batters. Which Hellickson the Rays will get has yet to be seen.
If his improvements stay, 24 year old Hellickson can have a moster year on the mound. Also a right handed, change up pitcher, he once averaged 10 strikeouts a game in the minors, so perhaps he's found his stroke for the majors. He does have a tendency for fly balls, but he'll be a stellar third man in the rotation.
4. Matt Moore, LHP 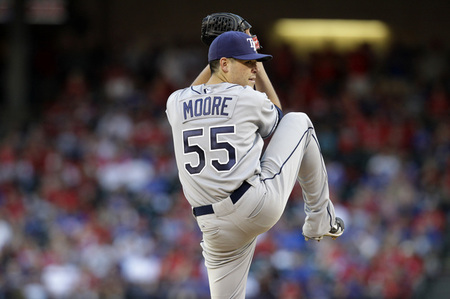 The man who took the post season by storm, Matt Moore is ready to start his rookie season. Moore is another lights out lefty for the Rays. If he throws 20 pitches, 18 of them might be fast balls.
In his brief stint with the Rays during September, he pitched a 2.89 ERA, 1.85 xFIP and struck out 14.46 K/9 over 3 games - and it's no fluke. Moore pitched Game 1 of the ALDS against the Rangers with 7 scoreless innings, allowing only two hits and striking out 6 batters.
He's the real deal. There are hints of David Price circa 2008 in his performance thus far, so we could see a slow start for Moore in 2012, but there's no cause for concern. In the minors, Moore struck out 13.50 K/9 in AAA, and averaged 12.0 K/9 in his career thus far. At age 22, and fresh off a contract extension through 2019, Moore is your player to watch this season. Feel free to go buy a jersey now.
5. Jeff Niemann, RHP 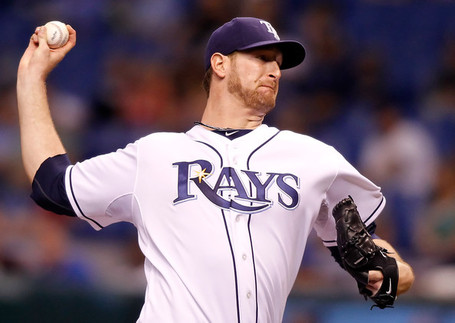 The Big Nyquil is back this year, winning the battle against Wade Davis for the fifth spot in the rotation. After returning from injury last season, Niemann went 10-3 with a 3.55 ERA while holding batters to a .239 batting average. At age 28, he's reaching his potential as a starter, but Rays fans can expect a great performance from him this season if he stays healthy.

Niemann had a chip on his shoulder, having been left off the post season roster last year. That determination earned his spot in the rotation. While some Rays fans might have felt attached to Wade Davis, Niemann has the most upside as a starter. 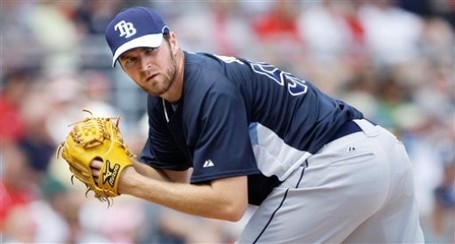 Davis Island will be pitching out of the bullpen this season, and as our editor has written: his velocity and his potential are both fit for a relief role. A former power pitcher, his pitching had grown labored and his speed had dipped to levels that let batters hit everything in sight. In relief, however, we see his old numbers return: 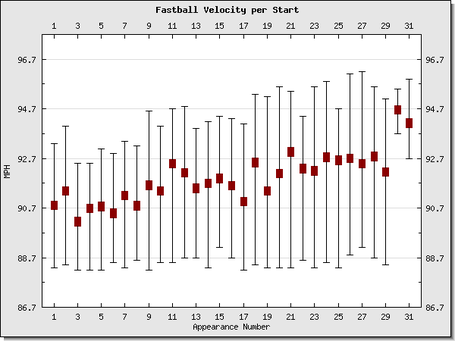 The last two appearances on the chart are in relief. Davis seemed quite reluctant to be converted from starting, but the Rays are hoping to see him return to form this season, and the bullpen will give him the best platform to succeed.

Davis will function as the Rays long reliever. If a starting pitcher is having a horrible day, Davis can step in and pitch four or five innings if needed. 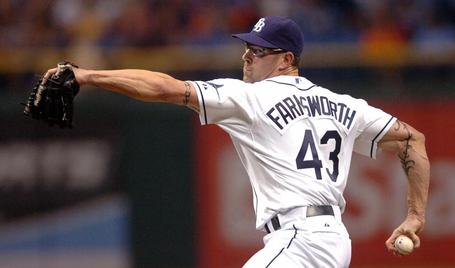 The Rays closer, Kyle Farnsworth, will start the season on the disabled list - but only for a short stint. Some elbow soreness has given management a reason to let him take it easy, and he is projected to be back when the tenderness is gone.

Manager Joe Maddon has been reluctant to give titles, as he sees his pitchers as being high leverage, low leverage, or specialists. The closer role is considered high leverage, but the sixth inning with bases loaded and two outs could be the most important part of the game as well. You never know when you might see a Rays reliever, but expect Farnsworth at the end of games. 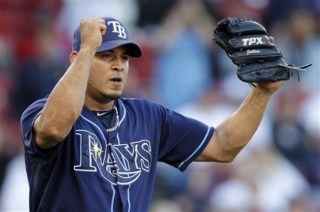 Peralta is the Rays other fireman - traditionally the eighth inning guy, but for the Rays that just means high leverage. As Farnsworth hits the DL soon, expect Peralta to get the nod.

Fully named Joel Peralta Gutiérrez, he made 71 appearances for the Rays last year including six saves in 18 ninth innings. His 0.91 WHIP made the 35 year old Dominican the Rays most used relief pitcher in 2011. He will be a free agent next year as well. 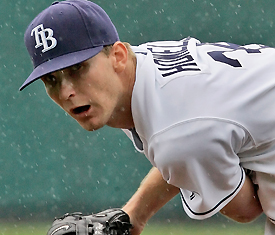 The former closer for the Rays, Howell has struggled with injuries for the past few seasons. After posting a 10.7 K/9 in 2009, he missed the 2010 season with multiple surgeries, and bounced around between the majors and minors during 2011. This year there are hopes he can become his former self. He played 46 appearances with the Rays in 2011 and got batters strike out at 7.6 K/9, but walked them at 5.28 BB/9 as well. He's currently best suited for small relief appearances, but has a lot of upside. This is JP's last year under contract. 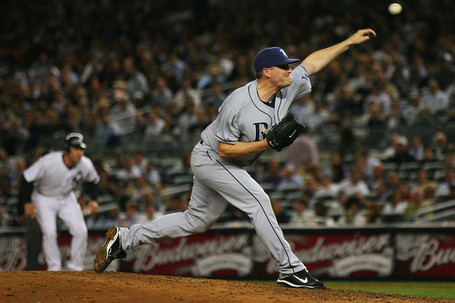 McGee is a pitcher with high expectations, but hasn't found his groove in the majors. The former closer for the AAA affiliate, he held a 14.0 K/9 (!!!) in the minors. His 2011 campaign showed promise with an 8.7 K/9 in the majors and a 10.3 K/9 in AAA. There's doubt he can live up to the hype, but management showed a vote of confidence by placing him on the opening day roster. 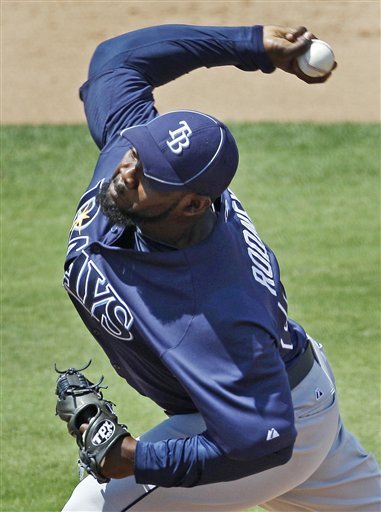 The Rays spent $2 mil for one year of a relief pitcher this winter. That's big news; that is Kyle Farnsworth money for this franchise. He's a change up pitcher that has a lot of potential, but has played mediocre until this year and left many scratching heads at the price tag.

So why did the Rays want him? Because most of his problems can be easily fixed. Pitching coach Jim Hickey most assuredly saw opportunity in Rodney to turn his game around, so the former Angel will be the player I'm most intrigued about in 2012. 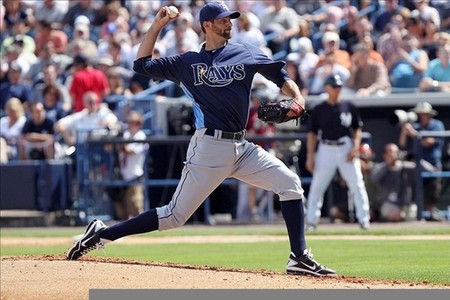 The newest addition to the bullpen is a man the Rays made a steal of a trade with the Marlins for: Burke Badenhop. He's a groundball pitcher that Miami had used as a long reliever. After looking at his career, we can assume the Rays will go in a different direction and use his slider/sinker repertoire for right handed match ups and double play situations. He will be a free agent next year.

Given the risk of injuries for pitchers, there are always a few relief guys on hold in AAA ready to be called up. There are three worthy of note as the season begins.

Cobb started 9 games for the Rays in 2011 with a 3.42 ERA. He earned a win in 3 of those games and only got 6.3 K/9 in his 53 innings of work. His AAA numbers showed nearly a 10.0 K/9 and a 1.87 ERA despite having hoorible luck (.331 BABIP) so his upside is strong. He's fantastic insurance for the Rays this season should there be any injuries in the starting rotation and Wade Davis stays in the bullpen.

Acquired from Seattle for catcher John Jaso, the Rays gave up a starter to give Lueke a chance. He found himself in AAA to start the season, but he's likely the first to be called up. His case for a bullpen slot shows him striking out 20% of batters with a curveball and sinker that get a lot of empty swings from batters. He had two options left to be sent to AAA though, so he's starting the season on call.

Ramos made 59 appearance for the Rays last year, but his walks were too high (5.15 BB/9) and his strike outs too low (6.39 K/9) to earn a nod to start the season. Last spring he performed will to earn a job in the pen. This spring saw much of where he left off last year. He has the most experience of any lefty reliever in AAA, so he's on call. Hopefully he seizes the opportunity to develop in the minors to return stronger on his next visit.

For a preview of the 2012 Tampa Bay Rays offense, read here.

For all things Rays, visit our affiliate DRaysBay.