A comprehensive look at the starting infield, outfield, and bench players on the Rays roster this season.

If you buy something from an SB Nation link, Vox Media may earn a commission. See our ethics statement.

With Opening Day upon us in major league baseball, the time has come to take a look at the 2012 Offense for the Tampa Bay Rays. 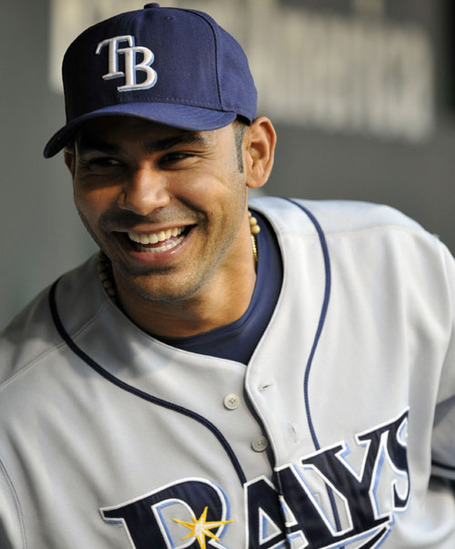 Carlos Pena left upwards of $2 mil on the table to give his smile one more year in Tampa Bay. After playing four years as the Rays starting first baseman, the Scott Boras client took his talents to the North Side of Chicago to the tune of $10 mil. The Cubs didn't take too kind to his .225 batting average and let him walk in free agency (Not a bad move, given Bryan LaHair's numbers he was crushing in AAA). Anyways, the Rays fans will certainly be thrilled to have the Los back in house, and at a discount price of $7.25 mil. 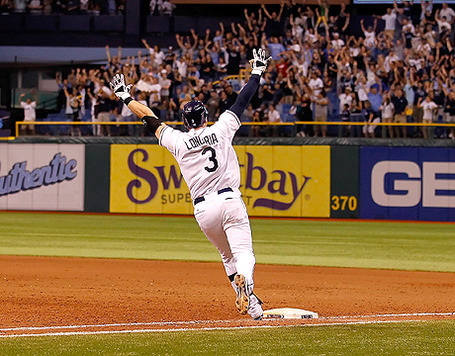 Live this moment again and again and again. Possibly the most dramatic night of baseball we will ever see in our life times played out in Game 162 last season, and when you find your way into Cooperstown, there will be a picture of Evan Longoria's arms raised above his head - along with his bat and ball.

If the Rays had a captain, he would be it. Last season we saw him take an active role in the dugout, rallying the troops and giving words of encouragement. Signed with the Rays through 2016, he knows this is his team. When he stays injury free, he's unstoppable. For the last three years he has been the most valuable third baseman in baseball. Let's hope for a healthy 2012 and more of the same from Longoria. 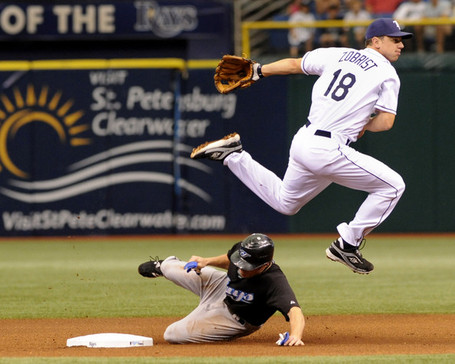 The switch hitting second baseman is still the Zorilla he know and love. He will start the season as the Rays number two hitter, which is normally a battle between himself and BJ Upton. His wife, the Christian recording artist Julianna Zobrist, recently released a new song and will play as his walk up song in 2012. 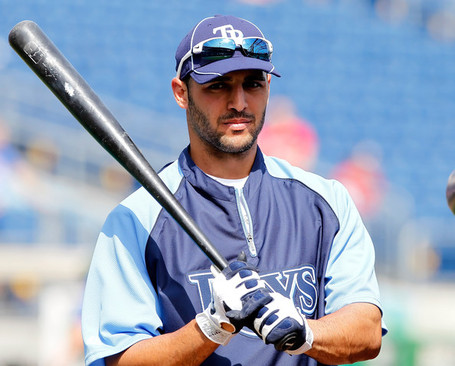 S-Rod played last season as the back up infielder, platooning with Ben Zobrist at second base most of the year. In his second year in the majors, he saw great improvement in his plate discipline - lowering his strikeouts to 20% and his walk rate to 8.7% (compared to 25% and 5.6% respectively). He saw a slight dip in the number of swings he took, and made contact more effectively than in 2010, all positive signs of improvement. If he can generate even more free passes, he will become a viable starter for the Rays.

Known for dramatic dives in the infield, his defense is a plus to his game. He had a slow start to last season, Rodriguez was the first Rays player to be stung by a Rays fish. The cut on his foot healed quickly, though. This year there are no unique injuries to report, and before platoons he will be the starting short stop. 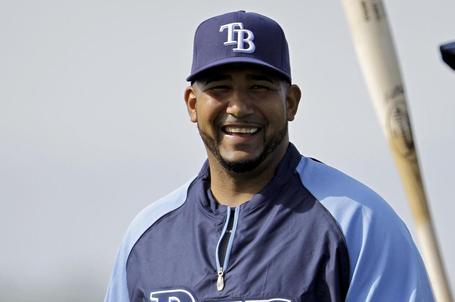 The middle Molina brother, he has played on two World Series teams - the 2002 Angels and the 2009 Yankees. Jose is known in particular for two things: being the last player to hit a home run in Old Yankee Stadium, and DEFENSE. It's no secret the Rays love some defense, and this off season proved it. How did this Molina catch their attention?

First came some new research by Mike Fastat Baseball Prospectus about catchers framing pitches, and the study found Molina to be the best in the business. The Rays then neglected to pick up their option on former backstop Kelly Shoppach (now with the Red Sox) and had a gaping hole at catcher. Enter Jose Molina. Our Rays affiliate DRaysBay broke the news first, and the 39 year old officially signed with the team a few weeks later.

Molina started only 55 games as the back up in Toronto last year, and being the Rays primary catcher there are hopes he can start 100 games this year. He will likely fall somewhere in the middle, without much offensive production. 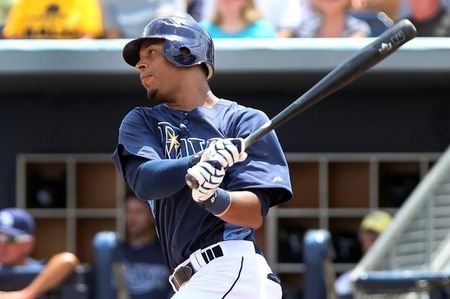 When Jennings got the call to join the majors after the All Star break in 2011, the collective sigh from Rays fans was finally. DJ tore up the majors in his mere 63 games last season. He stole 20 bases and posted a .356 OBP as the Rays new lead off hitter. A wrist injury held him back last year, but there was no sign of it upon his arrival. It will be interesting to see what kind of numbers he can break out in 2012.

Some expected Jennings to make his debut after the departure of long time left fielder Carl Crawford, but at the time Johnny Damon was the everyday left fielder, and the front office waited as long as possible to be sure he had developed. As Joe Maddon said, "Jennings is not the next Carl Crawford. He's the first Desmond Jennings." His purpose has never been to replace who CC was. His purpose is to become his own man, and to achieve his own potential. Getting called up mid season surely helped him shrug that expectation, and there is no hint of it this year. 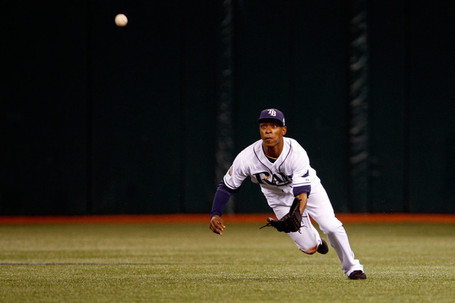 A former first round draft pick, BJ Upton has been the Rays starting center fielder since 2007. His value in centerfield has made him the most oft trade rumored player on the roster, but his offensive production has continued to improve every year and no one has ever overwhelmed the front office enough to take him off the Astroturf.

His nonchalant style on the field is enough to make you pull your hair out, catching every pop fly one handed and you could swear he's shuffling his feat to follow a ball that ricocheted past him. That doesn't make him any less of an athlete, though.

With 23 home runs, 36 steals, 11% BB, .331 OBP, and .429 SLG during last season, Bossman Junior kept pace with what has been expected of him. Still, the older brother of Justin Upton, both are expected to have breakout years. BJ will be entering his final season under contract and hopes to stay in Tampa Bay, while Justin is primed for another 6.4 WAR season with the Diamondbacks. BJ has never cracked 5.0 WAR, but has produced at least 4.0 WAR in four of his last five seasons.

He will start the season on the Disabled List with a sore back after colliding with Desmond Jennings in the outfield during spring training. 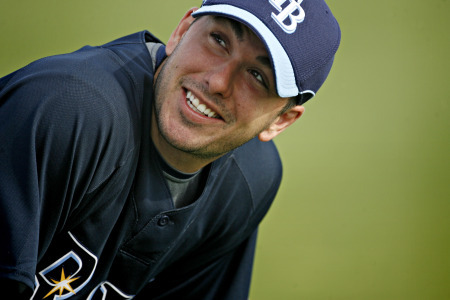 The man that should be the starting right fielder, Joyce is known for three things: hitting for power, being a five-tool player, and getting injured. Ask Jonah Keri about him sometime, you'll get an ear full for twenty minutes about his potential and how Joe Maddon should start him every game. Expectations are high for this 27 year old.

He was traded by Detroit for SP Edwin Jackson in 2009. He battled an elbow injury and played only 77 games in 2010, but finally broke out of his mold last year and Joyce was elected to his first All Star Game in 2011. In his first full season, Joyce was worth 3.8 WAR and swang a .347 OBP. He seemed to let his defense lag as he concentrated on becoming a better hitter. Depending on how his off season went, he could easily blossom into the full 5-tool player he's expected to become. 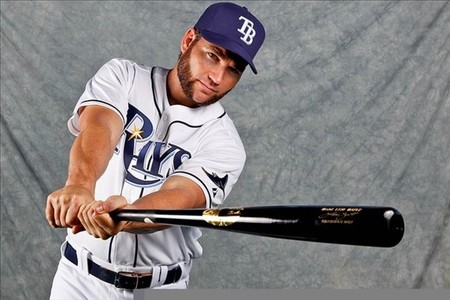 Every off season it seemed like the Rays were making a push for the former Orioles slugger Luke Scott. Now that he's here, some wonder if it was the right choice. There has been some extensive research of his Home/Away splits that suggest his bat will not bode well in the dead air of Tropicana Field, but the front office seemed please with his potential so I'll be watching with full faith in the lumberjack.

He's still recovering from shoulder surgery and won't be ready to play the field, but could see some reps in the outfield later in the season. He's also the Rays player most likely to be read about in the paper for going Tim Thomas on the media, though I doubt he would skip the White House visit should the Rays grasp October glory.

He averaged 25 homers in his three seasons before the surgery. 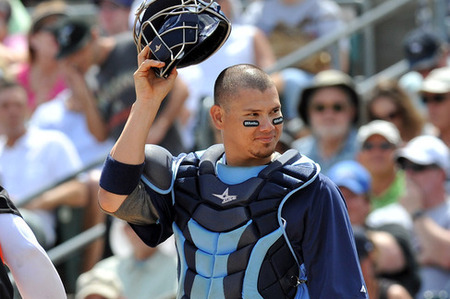 This Jose has only 39 major league at bats to his name. He won the starting gig over Robinson Chirinos, who is still recovering from concussion symptoms. As noted on DRaysBay yesterday:

"Jose Lobaton was claimed from the Padres organization before the 2010 season and had a .329 wOBA with the Durham Bulls that season in 271 plate appearances. Last season, he surprised many by posting a .398 wOBA in 224 plate appearances with a .293/.410/.489 slash line and a 17 percent walk rate along with a near league average 22 percent strikeout rate."

Should his numbers translate to the major league level, we have ourselves a duo. 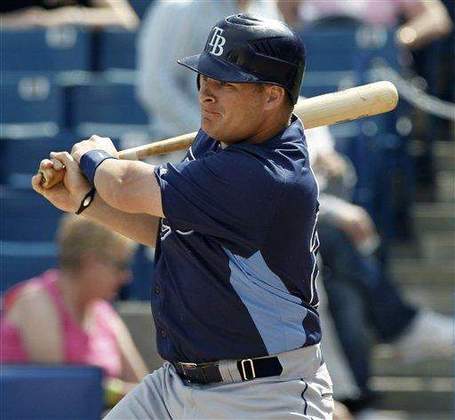 The man whose name has been the source of many puns and fantasy baseball names this off season, the 27 year old recieved the call up to the majors when BJ Upton was placed on the DL. He has the ability to play catcher, and the versatility to move around the outfield, so as a bench player he is valuable.

For more on Vogt, read here. 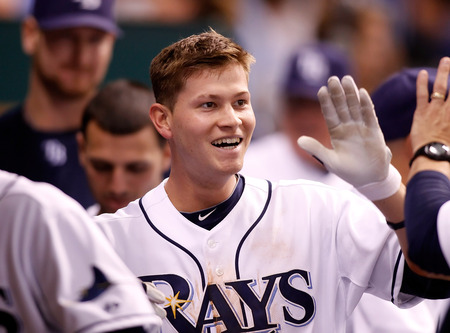 Reid Brignac remains on the Rays roster, though his bat has not earned him a starting position. There are many that speculate that he should get regular time in the minors when BJ Upton returns from injury, but Tim Beckham is currently holding down the fort in AAA Durham, and Hak Ju Lee in AA Montgomery. Brignac has gone from being the darling defenseman at the hardest position on the diamond, to the odd man out.

At the moment he will continue to be platooned at Short Stop with Sean Rodriguez, based on the match up. His best alternative may be to be traded, though. 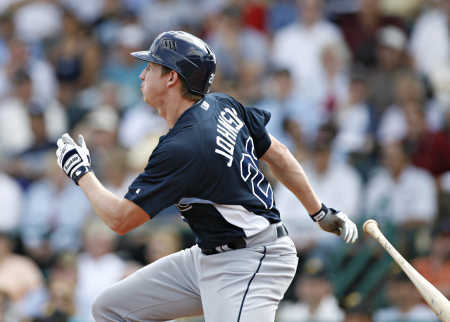 This man can play anywhere. We haven't seen him catch or pitch, but given the chance I bet he would. His value will never come as a starter. He has defensive versatility to play anywhere and everywhere, and is the exact kind of player Joe Maddon loves to tinker with off the bench. Should his knees stay healthy, he will be around.

With BJ Upton on the DL, Johnson could make a couple appearances in Center Field until his return. 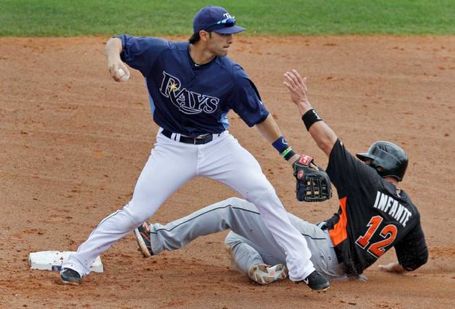 Looking to make his way back to form after foot surgery in early 2011, Kepp is ready to provide the Rays with some experienced depth off the bench. He can mash any left handed hitting, as noted by DRaysBay, and he has a career .324/.371/.481 slash line against southpaws. Also of note, the Rays play within a division where 35% of starters are left handed. 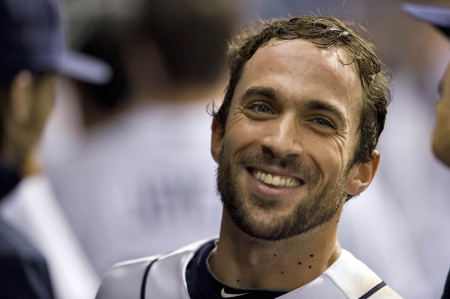 The Legend of Sam Fuld has been covered extensively across baseball, from our site to the most mainstream media. Super Sam is a poet in the outfield, covering incredible distances and playing the best defense you will see with your own eyes.

Unfortunately, Super Sam needed wrist surgery to fix a lingering problem and isn't expected back until the All Star Break. But in the mean time, feel free to reminisce.

For a preview of the 2012 Tampa Bay Rays pitching staff, read here.

For all things Rays, visit our affiliate DRaysBay.