The Rays lineup got aggressive on Yu Darvish late in the game, and it cost them.

Share All sharing options for: Rays 1-0 Loss Made Only More Frustrating By Yu Darvish's Bad Command

Recording 7 hits and getting 0 runs is frustrating enough, but when a team gets 6 of those hits in the first five innings -- while their pitcher is holding one of the best offenses to just 1 run -- it is enough to drive a body insane.

In the first five innings of Tuesday's game against the Texas Rangers, the Tampa Bay Rays had 6 hits, including a Luke Scott double, and 2 walks -- a total of 8 baserunners that created 0 runs, leading to a 1-0 Rays loss.

These things happen, though. It's baseball. A pitcher leaves a dozen runners on base one day, and then lets everyone score the next day. And after the Rays squandered their early opportunities, it still seemed like they had a decent chance of taking the 1-0 lead back from the Rangers; pitcher Yu Darvish had shown spotty command and the Rays -- who lead the league in walk rate -- typically feast on spotty command pitchers.

But instead, Darvish shut the Rays down. The Rays broadcasters -- Brian Anderson and DeWayne Staats -- praised Darvish for his final three innings (innings 5, 6 and 7), observing how he locked down the Rays lineup. But in actuality, it was the Rays who locked the Rays down.

Here's a look at Darvish's pitches in the first four innings: 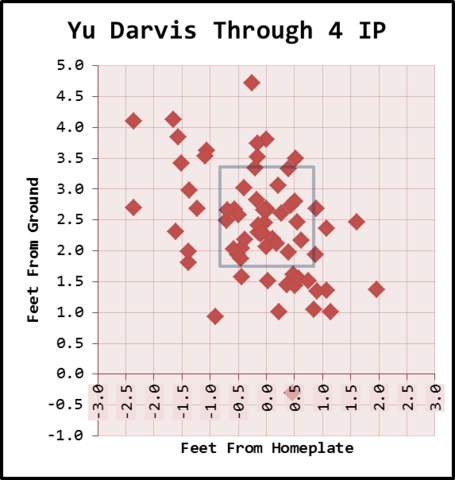 And here's his pitches in the last three innings: 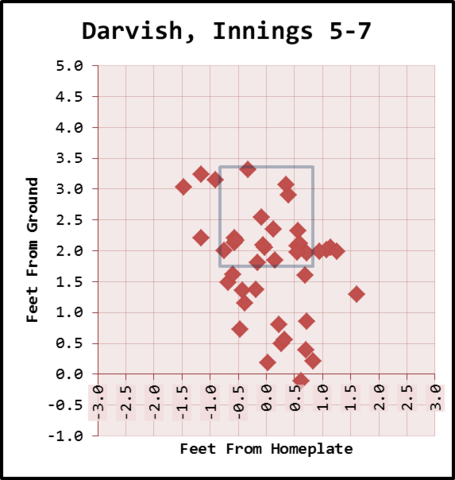 Darvish looks just as zone-adverse through his final three innings as he was in the first four innings. The only difference -- and this made a world of difference -- was that Darvish was keeping his pitches down. He reduced the high, arm-side pitches, but then buried way more pitches low and on or in front of home plate.

The net effect was in an increase in the Rays' hitters aggressiveness. In the first 67 pitches (the first 4 innings), the Rays had 8 swinging strikes. They tried to wait for Darvish to put himself into trouble -- and that's exactly what he did, but he lucked his way out of those early struggles. Then, in the final three frames, the Rays had 11 swinging strikes on 42 pitches.

That's a 12.0% swinging strike rate through the first four, and then a whopping 26.2% swinging strike rate in the final three. Darvish did not appear to gain much control later in his start, but did cut down on the high, arm-side pitches. That small change, coupled with an increasing sense of desperation from the Rays lineup, led to an ugly 1-0 loss for the Rays.

Hopefully against Matt Harrison, the Rays will return to their patient ways, and let the game come to them.

Rays Vs. Rangers: Rays Avoid Sweep, Are Within Half Game Of Wild Card