The Rays Playoff Push: Matt Moore, Let Them Swing Away

Share All sharing options for: The Rays Playoff Push: Matt Moore, Let Them Swing Away

The Tampa Bay Rays are in a perfect position to make a run at the AL East division crown. The lineup is starting to hit, with guys like 1B Carlos Pena, OF Desmond Jennings and newly-acquired INF Ryan Roberts churning out hits (2B/OF Ben Zobrist, it should be noted, has been producing with the enviable consistency of a water mill); OF Matt Joyce and 3B Evan Longoria will be healthy and hitting in the same lineup soon; and the pitching rotation -- anchored by strong second halves from SP David Price and SP James Shields -- has been filthy like dog in a puddle.

So, what does struggling rookie SP Matt Moore have to do in order to join this wave of growing momentum? Throw strikes.

Easier said than done 70 times in one day, right? Matt has struggled with his command almost all season, and it has eaten away at the gloss with which he entered the season -- No. 1 prospect in the Rays system, possibly the top prospect of the season and in the majors (a conversation that has all but died since his first two starts).

Moore's starts are either good or bad depending on his strikeout-to-walk ratio. If he is striking out a metric ton of batters, he is usually not walking any. If he is walking more than he'd prefer, then he's probably not striking any out either. For Moore, it is either glory or death, with nothing in between.

Delving into his stats by start, we glean a few important facts:

If we graphically put this together, we can see how some of Moore's best starts have come with lower velocity and more swings: 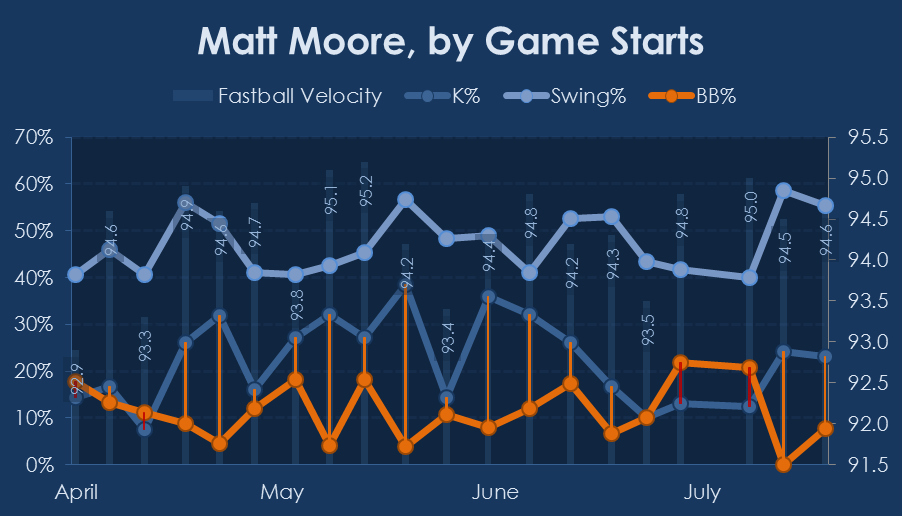 Note how his bad games, the games where he walked more batters than he struck out (denoted by a red bar in the middle), have come with some of Moore's highest velocities. At the same time, some of his lowest velocities also came with poor outings, so he does not necessarily want to give up on throwing the heat.

His best starts came with a fastball velocity anywhere from 94 to 95 mph -- basically, his Happy Zone should be 94.2 to 95.2 mph, and that's a lot of space to work with. But, then again, since he started the season cold, his early numbers are bound to weigh down the lower velocities. Early in the season, pitchers tend to throw their slowest fastballs as they build their arm strength, so who knows; maybe he could have success in the 93 mph range?

What matters most, it would appear, is just throwing strikes. Let's explain this visually:

When he throws strikes: 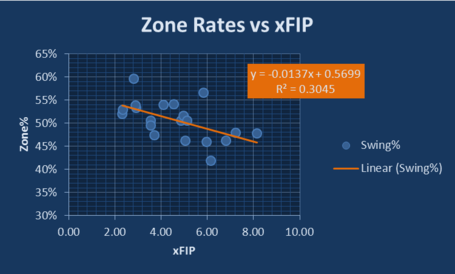 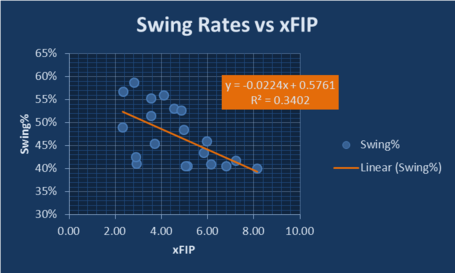 And results improve, regardless of velocity: 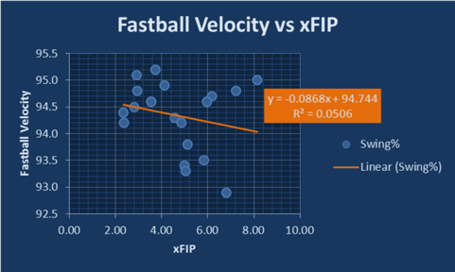 So throw strikes, Moore, and don't worry about the gun.