The Tampa Bay Rays -- should they chose to trade James Shields -- should be paid well for trading a cost-effective pitcher who has shown no signs of aging.

The Tampa Bay Rays currently sit 6.5 games behind the New York Yankees and 5.5 games behind the Baltimore Orioles in the Wild Card. With only 12 games remaining, it appears increasingly likely the Rays will miss the playoffs for only the second time in the last five seasons. It is natural then for Rays fans to start turning their eyes towards tomorrow, towards the 2013 MLB season.

Though the biggest problem facing the 2012 Rays team ended up being injuries to key offensive players (namely Evan Longoria and Luke Scott), the Rays will have another problem heading into the 2013 MLB season in the form a gluttony of starting pitchers. Baseball analyst Steve Kinsella took the issue to the readers of DRaysBay on Friday, and the overwhelming belief among the DRB readership is that Shields is on his way out the door.

Kinsella breaks the situation down well:

Shields is arguably the Rays biggest trade chip and would most likely be used to acquire the one commodity the Rays don't have in the upper level in their system which is major league ready bats.

Overall in 2012 he has a record of 14-9 with an ERA of 3.77 and a FIP of 3.65 and this marks the 6th straight season he has delivered 30 starts and at least 200 innings pitched. Shields could certainly be used to obtain the bats to balance the Rays anemic offense.

With two club option remaining -- and club options priced at a club-friendly rate -- the Rays could conceivably hold onto to Shields at least one more season, even two if they felt they could re-sign him or get a draft pick from his departure in 2015.

But at age 30, Shields is already entering a scary zone with regards to aging. Would the Rays be wise to cash out now, or should they look to trade someone such as Jeremy Hellickson or David Price, who would not only fetch more in terms of prospect talent, but who will be prohibitively expensive even sooner?

It is a tough question, but there is good reason to think Shields will age well. Not only do pitchers with heavy changeup usage age better than other pitchers, but also advanced statistics like Skill-Interactive ERA (SIERA) suggest that Shields may even still be approaching his career potential: 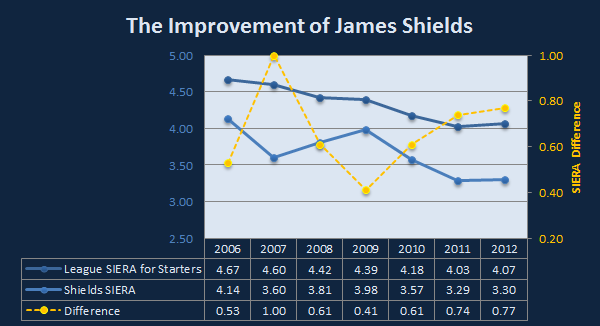 SIERA is not necessarily the best estimator for Shields' ERA, but it does an excellent job of showing how he has managed to increase his strikeout rates while also improving his groundball rate. Shields presumably will always struggle with the home run ball -- he has allowed an average of 27.5 homers per season since 2006 -- but the total package with Shields has resulted in a better-than-average ERA in all but 1 of the previous 6 years.

Should the Rays stick with Shields or trade him? It is hard to say he is getting worse and much easier to guess that he is getting even better, so any return from him should rival (though not exceed) the ransom that Price would bring. If the Rays choose to hold onto Shields, though, there's plenty of reason to see why.

For more on the Rays, please be sure to check out our blog DRaysBay and SB Nation Tampa Bay for all the latest news and updates. Baseball Nation has you covered for news for all 30 MLB teams.